Topps Cards That Should Have Been: 2005 Indians I think the modern relief pitcher has lost the art of being horrendously out of shape and still really good. The 2000s were a decade where Rod Beck, Todd Coffey, Todd Jones and Antonio Alfonseca were trusted relief pieces while also being big doughy guys. I think the doughiest relief guy we have now is Andrew Chafin, and he's in more shape than a lot of those 2000s guys.

I think the patron saint of these was Bob Wickman. Bob Wickman played for 15 years, became a hit in midwestern cities like Cleveland and Milwaukee, and just got up there and got people out in the ninth. Though he had some nice seasons in the late 90s and early 2000s, the biggest statement might have been in 2005, when he led the league in saves with 45, made an All-Star team, and did so while only striking out 41.

And yet...because Topps just LOOOOVES relievers, Wickman not only didn't get a Topps flagship card, he didn't even get an All-Star card. It was damn near shameful. Wickman would get an Indians card in 2006, but by that point the writing would be on the wall, and he'd be finishing the year in Atlanta. 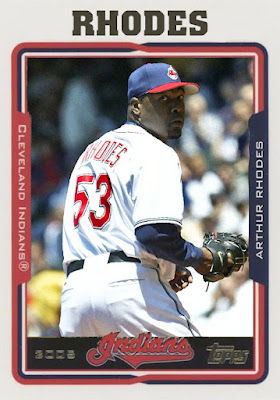 I always forget how dirty Topps did Arthur Rhodes before his renaissance in Cincinnati and Texas. After spending all of the 90s with Baltimore, Rhodes bopped around the AL for the early 2000s. He landed in Cleveland for the 2005 season and put in another strong campaign, with a 2.08 ERA in 47 appearances. A solid 1.0 WAR year for the career middle reliever. He'd go to Philly for 2006, with less starry results. 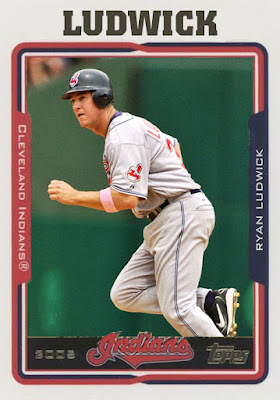 While everyone knows about Ryan Ludwick's career renaissance with the Cardinals, and how he turned that into a solid second career half in cities like San Diego and Cincinnati, people tend to forget that for the early 2000s, he was an A's farm product kicking around for far too long. First of all, he's a big piece of the Carlos Pena trade, so humorously depicted in Moneyball, then the Rangers trade him to Cleveland for Shane Spencer, and he spends his Indians tenure trying and failing to find starting time. 2005 would be the last of this tenure, as in 19 games he'd only hit .220, albeit with 4 homers. After a botched year in Detroit, he'd find his way to St. Louis and the rest would be history.

We're staying in 2005 for tomorrow's post, there are some cool Mariners to talk about from then.