Topps Cards That Should Have Been: 2005 Brewers 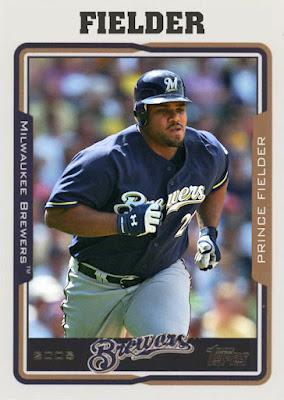 I'm starting this post on Topps' omissions from the 2005 Brewers with a sensible one, cause they're only gonna get less sensible as we go.

So. 2005 was the first season for Prince Fielder. He had a prospects card shared with another player in flagship, I gave him a full solo one because he deserved one. Despite only playing in 39 games, Fielder showed enough promise to carry the next stage of Brewers baseball, hitting .288 with 10 RBIs and 2 homers, admittedly less than I would have figured. 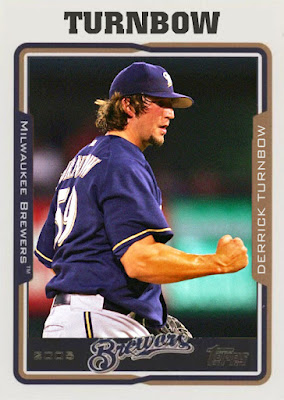 Additionally, a very sensible pick for this series would be a 2005 Topps card of Derrick Turnbow, during the best season of his career. While Topps made up for this in 2006, not having one in '05 as he's notching 39 saves is kind of an odd move. In addition to the 39 saves, Turnbow also sported a 2.9 WAR, fifth highest on the whole team. Topps' bias against relievers really pisses me off sometimes. 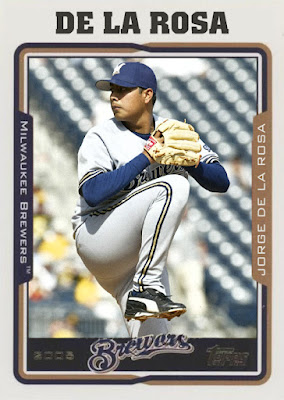 It would probably also be relatively sensible for this post to include a card of Jorge de la Rosa in his first full season. Despite Topps leaving him off, as a fairly straightforward relief pick, De la Rosa still appeared in 38 games, had a 4.46 ERA and 42 Ks, showing signs of future dominance with the Rockies. However, said move to Denver would be a team or so away, and here he was just a relief piece rather than a crafty starter.

Now we begin to bring in the strange cases. Having already been traded twice, by the Mets and the Athletics, Nelson Cruz was hoping for a slightly more permanent home when he arrived in Milwaukee in 2005. He didn't quite have a place in the lineup yet, hidden behind Carlos Lee and Geoff Jenkins, but he managed 8 games in the majors, only coming away with 1 hit in 7 plate appearances. Fatefully, he'd leave town again, being traded alongside Lee to the Rangers, where he'd have a larger come-up.
Knowing where Cruz's career would take him, it's very funny that he was seen as a lowly little prospect inn Milwaukee one time. I kinda wish Topps would have documented it, but it's something I can do. 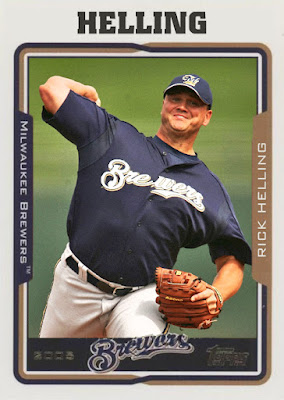 Rick Helling was one of the premier starters for the Rangers in the 1990s, winning 20 games in 1998, and winning 68 games overall for Arlington. His numbers as a starter dipped in stints with Arizona and Baltimore, he didn't make a roster in 2004, and people assumed that was it. But, lo and behold, in 2005, Telling reemerged in Milwaukee as a swingman. While his relief numbers in August were alright, he was made a starter again in September, due to lack of other options, and impressed mightily, with a 1.69 ERA and 32 Ks in 6 starts. His 1.9 WAR was his highest since leaving Texas. And while the 2006 season, a down one, would be documented by Upper Deck, Topps wouldn't touch his Milwaukee years, which is a shame. 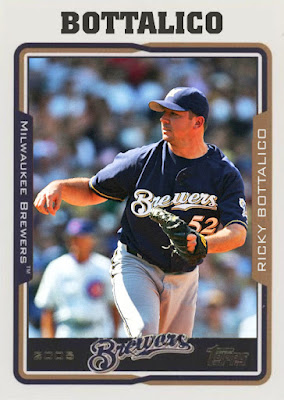 The strangest one I have is a sunset card for a 90s fringe closing hero. Ricky Bottalico was the closer for the Phillies in the late 90s, and was a definite character for those teams, as well as some Cardinals and Royals teams in that era. He eventually mellowed into a solid middle relief man, which was not at all what Topps was interested in documenting, so they went sort of cold on his trail for the last few years of his career, including a return to Philly. In 2005, at 35, he played his last games for the Brewers, and did alright, with a 4.54 ERA in 40 appearances. He tried making camp with the Orioles in 2006, but that didn't work out for him.
Crazy stuff, right? Tomorrow's batch will come from the 2006 Championship Cardinals team.
Posted by Jordan at 11:42 AM