Topps Cards That Should Have Been: 2014 Cubs 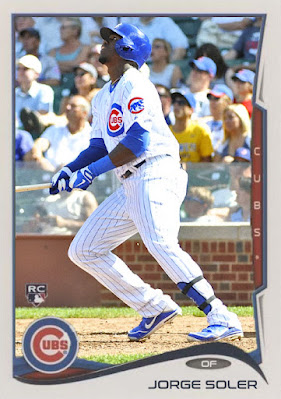 On one hand, I don't fault Topps for underselling the Cubs in 2014. The team was still terrible, the rookies weren't working yet, there wasn't a lot really to show.
But on the other hand, while Topps wasn't looking, the Cubs built the foundation for their playoff teams that would dominate the remainder of the series. A lot of today's omissions were due to rookie deadline things, but some were due to Topps not really comprehending some of Cubs' big pieces that had been there for most of the season. So I've got to do some work that they really should have done in 2014 Update.
We'll start with the reigning World Series MVP. Jorge Soler was one of two big rookie call-ups in the late summer months of 2014 for the Cubs. In 24 games, Soler hit .292 with 5 home runs 20 RBIs, already flashing some of the power he'd be known for the rest of his career. He'd later become a World Series hero with two different NL teams, and would lead the league in home runs in 2019. 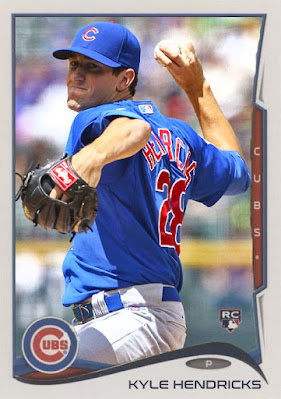 Kyle Hendricks honestly should have been in 2014 Update, considering that he made his debut before the All-Star break, but...again, the rookie rules were very dumb in this era. Hendricks was brought up to help cover for the loss of Jeff Samardzija, started 13 games and made a very fast impression, with a 2.46 ERA and a 7-2 record. It's funny, I didn't really know that Hendricks was a thing in Chicago til visiting Wrigley in 2015 and seeing his poster hanging there, and to this point he was already a viable starting option. And, obviously, he'd become a strong starting option for the Cubs til this very day. 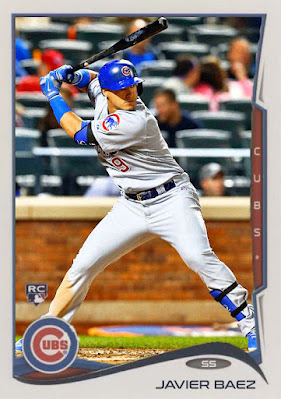 And the third very big Cubs rookie in 2014 that didn't make the rookie cutoff was Javier Baez. Unlike the first two, Baez started strong enough but eventually struggled to hit at major league level. And to be fair, he was 21 at the time, and between him and Urias, sometimes the younger call-ups need more time to blossom. Baez finished 2014 with a .169 average and a negative WAR. It wouldn't be until the latter half of the 2015 season where Baez would really take off and become the hard-hitting infielder we all know and love now. 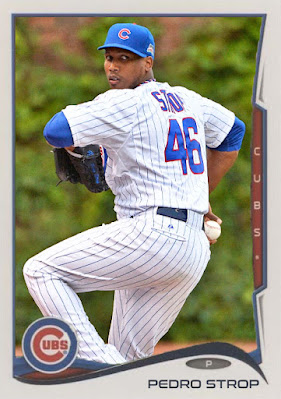 Onto some of the incidentals, Pedro Strop is a middle reliever, which explains why Topps wasn't racing to make a card of him in 2014. In his first full season in Chicago, Strop turned in a great performance, with a 2.21 ERA and 71 Ks in 61 innings, becoming one of the more trusted middle relievers in the Cubs' pen. It would be his strongest season for the Cubs until an equally powerful 2018 season, complete with some save opportunities. 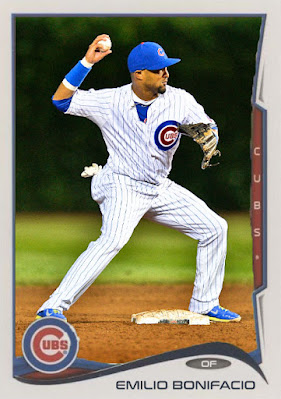 Emilio Bonifacio was the victim of Topps being too late and also on time at the same time. By the time Bonifacio suits up for the Cubs, Topps already has a 2014 flagship card out with him as a Royal from the previous year. Then, by the time Update's out, he's already been traded to the Braves. So they miss out on his Cubs numbers, which are pretty good. He hit .279 with 77 hits in 69 games, and having a 1.5 WAR on account of his flexible defensive numbers. I just wish Topps had found time to document it. 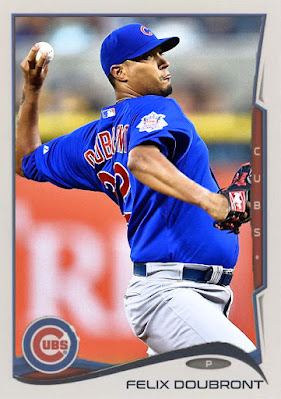 And as for the fringe one that Topps probably wouldn't have done, mostly because it came after the Update cutoff, Felix Doubront was a decent starting option for the Red Sox during the early 2010s. By 2014, he was struggling and demoted to the bullpen in Boston, and eventually shipped to the Cubs. Doubront actually did pretty decently in 4 games in Chicago, with 2 wins, a 3.98 ERA and a positive WAR. This would be the last decent numbers of his career. He'd split 2015 with Toronto and Oakland and peter off.
Tomorrow, we have some more 2014 Topps omissions from Arizona.
Posted by Jordan at 11:00 AM