Topps Cards That Should Have Been: 2007 Tigers 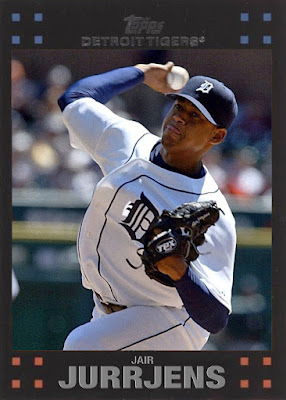 The Tigers' year in 2007, as strong as it may have been playoff-wise, or post-WS-wise, will always be known as 'the year right before Cabrera enters the mix'. As stacked as this team could feel with Ordonez, Polanco, Guillen, Verlander and Granderson, it was always missing a little something, and that something turned out to be Miguel Cabrera, who may last long enough to see another playoff run in the next few years [maybe. We're not quite sure yet].

In the heat of August, the Tigers brought up a rookie starter named Jair Jurrjens, direct from Curacao, to help things out. In 7 starts, Jurrjens would post 3 wins, a 4.70 ERA and a 1.141 WHIP. As nice as he was during the season, the Tigers' conquests in 2008, including bringing on Edgar Renteria, would result in Jurrjens being traded to Atlanta, and becoming a crucial starter for the next 3 or 4 seasons. 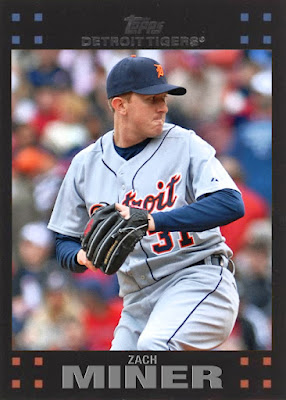 As someone who's followed Topps for years, Zach Miner seems like the exact type of pitcher that'd warrant a 2007 Topps card. He had some starts in 2006, was a crucial member of a World Series team, and made the playoff roster in his rookie season. A 'tribute to 2006' kind of set like 07 Topps Series 1 could have used someone like Miner, but alas. Perhaps they knew something, because Miner was shifted to the bullpen in 2007, with a 3.02 ERA in 34 appearances, acting as a long man most of them. He'd start a few more games in 2008, but would never find the prevalence of his rookie year. 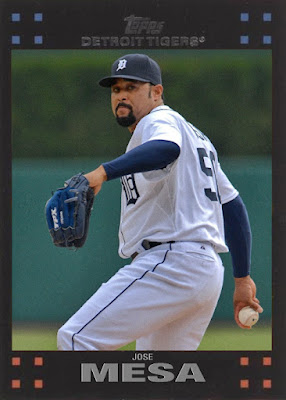 Okay, back to Jose Mesa. The other day I was talking about his insanely strong Rockies numbers in 2006. The Tigers saw that and thought Mesa a great addition to their bullpen, they sign him. Mesa is now 41 and beginning to lose his better abilities, and pitches a disastrous 12.34 ERA in 12 appearances before being cut. Mesa's old team, the Phillies, would take advantage of this, and bring Mesa on for the playoff run, where he'd do a bit better and make the postseason roster.

Tomorrow, we flashback to 2006 with some intriguing exclusions from Topps' Twins output.

Posted by Jordan at 10:59 AM
Labels: 2007, Jair Jurrjens, Jose Mesa, Tigers, Topps Cards That Should Have Been