Topps Cards That Should Have Been: 2006 Cardinals 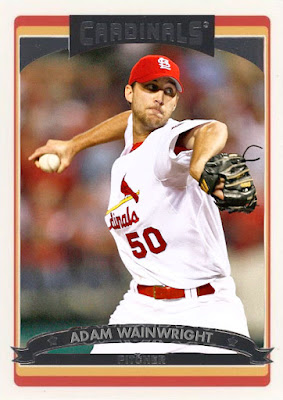 In 2006, the St. Louis Cardinals won their first World Series in 24 years, and since they hadn't torn Ryan Howard's achilles yet, I was perfectly fine with this.

I mean, if anything, I wanted the Tigers to lose, because the Yankees had a shot that year and we really should have been there, but...this Cardinals team was surprisingly likable, and it was cool to see players like Albert Pujols, Scott Rolen and Jim Edmonds receive their first W.S. rings.

It was also the first ring for a player who's still lights-out to this day, and that's Adam Wainwright. Probably the biggest omission Topps made in compiling their Update set, Waino, in his first full season, was used entirely as a bullpen piece, appearing in 61 games with a 3.12 ERA and 72 Ks. Even more importantly, he went scoreless in 9.2 postseason innings, with 15 Ks, 4 saves, and a crucial W.S. win. It was the breakout season for a player who'd become Cardinals baseball for the next 15 years, and...he didn't get a proper card til 2007 Topps. 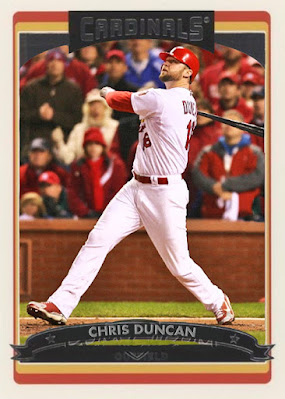 Chris Duncan also had a breakout season in 2006, hitting .293 with 22 homers and 43 RBIs in 90 games. He was an excellent outfield piece, covering for Edmonds during an injury, and providing bat support when So Taguchi just wouldn't cut it. This season would set him up as a Cardinals mainstay for the next few years before flaming out at the end of the decade, and eventually passing a few years ago. 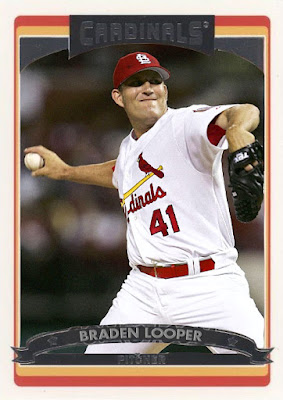 Braden Looper, one of the more underrepresented closing pieces of the 2000s as far as Topps is concerned, was coming off a decent season closing up in Queens before he signed with St. Louis. While the ninth was occupied by Jason Isringhausen, Looper still worked really well as a relief piece, with a 3.56 ERA in 69 games, including 9 wins. This would be the last truly strong season of his career, before his numbers would dip in the next 3 seasons. 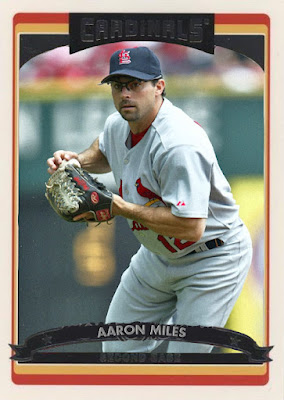 One of the sneakiest moves the Cardinals made prior to the season was snagging Aaron Miles from the Rockies in exchange for Larry Bigbie and a prospect. Bigbie's tenure in Colorado was forgettable, but Miles quickly became a strong 2B option in St. Louis, hitting .263 with 112 hits. He did have some defensive troubles that held him back from being an elite choice, but he got them to a World Series, didn't he? Hell, he had some pretty nice contact numbers in the playoffs. 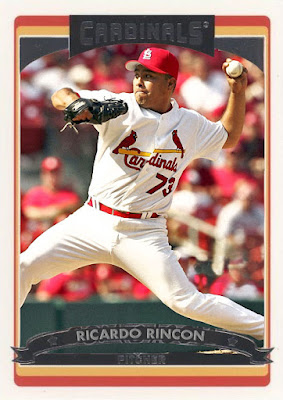 Onto the unsung heroes portion, for 5 games the Cardinals had support from Ricardo Rincon, immortalized by his role in the 2002 Moneyball A's team. After 3 strong years with Oakland, Rincon signed with St. Louis, and had an injury-plagued year where even in 5 relief appearances he couldn't keep his ERA below 10. If the Cardinals didn't have as many excellent relief options in 2006, it would have been a worrying absence. 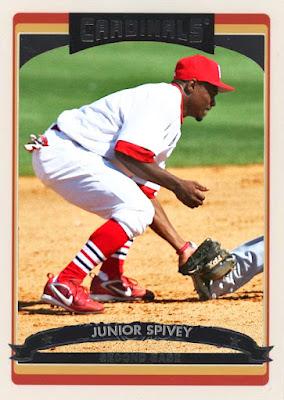 And before the Cardinals were dead set on Miles at 2nd, they had signed Junior Spivey to a minor league deal, after his strong work a few years prior with Arizona. However, in the years since his 2002 breakout he had dulled into a fairly forgettable infield contact bat, and he struggled in a Spring Training audition. He'd never find MLB numbers again, which is a sad end to a career that seemed to be so promising at one point.

Tomorrow, we'll look at some Cubs from 2014, the year before things went crazy for them.