Topps Cards That Should Have Been: 2005 Pirates 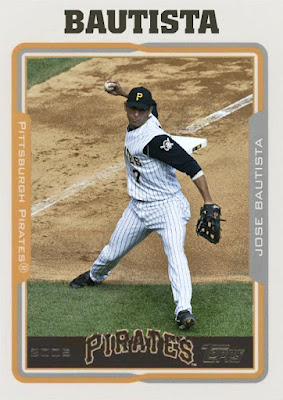 While in the midst of their 'so godawful it's not even funny' phase of the mid-2000s, the Pittsburgh Pirates were able to accumulate some bizarre talent, mostly because their team would be consistently be a base for 'look, no one's watching, let's give this guy a shot' mentality players.

The most important one for the purpose of this post is Jose Bautista. 2005 was a more stable year for Joey Bats- instead of playing for four teams in one season, he just had the one, the Pirates. This was a year before the Pirates would figure out exactly what to do with Bautista, as they still had Freddy Sanchez and Ty Wigginton as primary 3rd base options. So in 11 games in 2005, Bautista only hit .143 with 4 hits and, shockingly, no home runs. He'd do much better in the years to come. 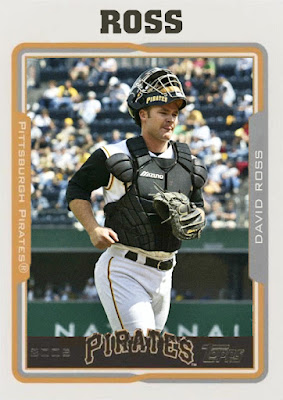 As for backup catchers, the Pirates went through a couple over the course of the season. The primary options were Humberto Cota and Ryan Doumit, and Ronny Paulino would be brought up later as a future option. In between that, the Pirates tried David Ross, pre-Grandpa Rossy era of backup catching. Ross hit .222 in 28 games, but was mostly relied upon as a defensive upgrade. He'd find a more stable home shortly as a member of the Reds, and would later become Jon Lester's personal catcher in Boston and Chicago. 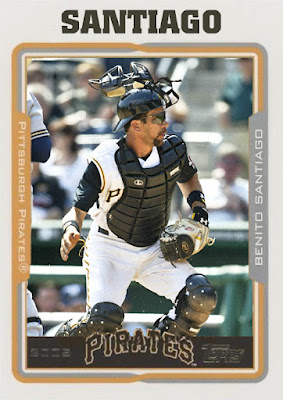 Stranger still, the Pirates began 2005 with the top-string option at catcher being Benito Santiago, who was 40 years old and coming off a weaker year with Kansas City after some, hmm, SURPRISINGLY STRONG SEASONS IN SAN FRANCISCO WHILE BARRY BONDS WAS THERE. Santiago was the team's opening day catcher, and played 6 games for the Bucs, hitting .261 with 6 hits, but struggling defensively. After being cut, he'd try once again with the Mets in 2005 before hanging it up.
Tomorrow, I'll unveil some 2014 Rangers that Topps should have done something with.
Posted by Jordan at 2:58 PM
Labels: 2005, Benito Santiago, David Ross, Jose Bautista, Pirates, Topps Cards That Should Have Been