Topps Cards That Should Have Been: 2007 Nationals 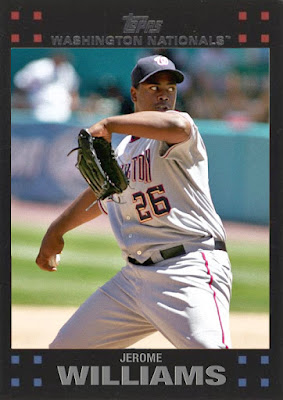 There being a strange 2000s Nationals team should kind of go without saying.

Pretty much every season until 2012, the Washington Nationals were desperately searching for some semblance of identity, trying anything that worked, even established players in need of MLB work. You'd see the strangest combinations in this era. Paul Lo Duca in 2008? Sure! Ivan Rodriguez at the very end of his career? Why not? Actual people in their prime like Adam Dunn, Alfonso Soriano and Adam LaRoche? Maybe it'll work.

2007 was one of the stranger ones, not because of the amount of ill-fitting players I have that Topps didn't make cards of, but because of how many of them were forced to play crucial roles with this team.

The most logical one is Jerome Williams. Sure, this is as he's finished up his tenure with the Giants, and is a few years away from reviving his career with the Angels and Phils. Maybe he would wind up in Washington. In six games with the 2007 Nats, however, Williams struggled mightily, not winning a single game, losing 5, and walking away with a 7.20 ERA. After this season, he would not reach the majors for 3 years.

Onto the truly odd sights. 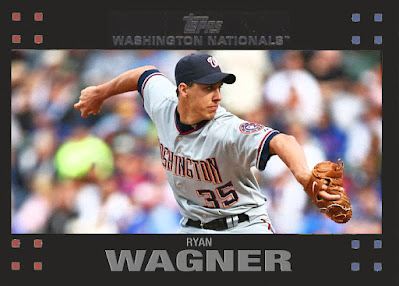 Ryan Wagner might have been one of the unluckier relief pieces in this era of baseball. He's a 1st round draft pick for the Reds in 2003, makes the majors THAT VERY YEAR, at 20, and becomes a relief piece, then sort of struggles in subsequent seasons, is traded to Washington in the Austin Kearns deal, and plays his last season in 2007. At 24. A year younger than I am currently. His career went by in a flash, and as good as he could be in relief, I wished he would have had better luck. In 14 games with the Nats, he had a 5.74 ERA and his highest career WHIP. 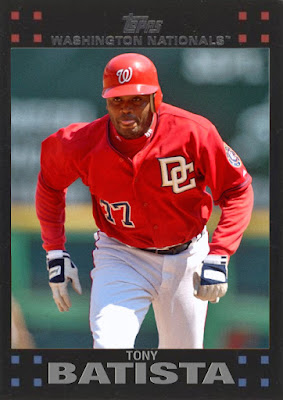 In 2002, Tony Batista took over the 3rd base position from Cal Ripken Jr., and was touted as the next comparable star in Baltimore. By 2004 he was playing for Montreal. Batista's streaky, all-or-nothing hitting mentality was infuriating for a lot of teams, and by 2007 he was coming off a disappointing year with Minnesota. The Nationals took a chance midyear, he mostly hit off the bench covering for Dmitri Young, and he hit .257 with 16 RBIs and 2 homers in 80 games. Like Wagner, this would be Batista's last MLB season. 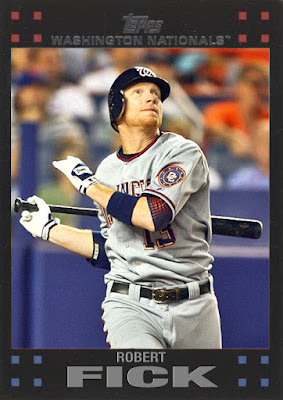 Perhaps the most surprising thing here is that not only did Robert Fick play for the Nationals in 2007...Robert Fick played 118 games for the Nationals in 2007! The former Tigers bench bat and 2002 All-Star had been struggling to recreate the consistency of his Detroit heyday in stints with the Braves, Rays and Padres. By 2006 he'd accepted a bench role with the Nationals, he hit .266, and they were nice enough to bring him back. Topps, who'd stuck with Fick for most of his down seasons, tuned him out for 2007, where he'd have his 118-game final season. Fick wouldn't be exactly a huge asset for the Nats, as he'd only hit .234 and finish the season with a negative WAR, but he'd be the sort of bench bat that would keep them afloat, much like his Tigers days. 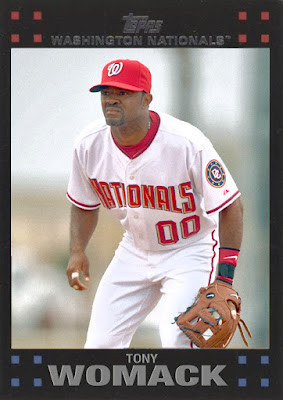 And we end on the one that didn't exactly happen, but should have. Tony Womack, after leaving the Diamondbacks in 2003, failed to latch onto a consistent base like he did in Pittsburgh or Phoenix. Between 2003 and 2006, he'd play for the Cubs, Rockies, Cardinals, Yankees, Reds and Cubs. He'd be pretty great in a lot of those markets, especially St. Louis and Chicago, but teams felt they didn't need him for more than either a one year rental or a playoff push. In 2007, Womack was 37, winding down, still felt like he had some stuff left. So he signed a minor league deal with the Nationals, tried to make camp. He did not, and while a few pictures exist of him in Nationals duds, nothing ever really came of it, sadly. So he finished his career there, and it's not exactly a career to be discouraged by either.

Labels: 2007, Jerome Williams, Nationals, Topps Cards That Should Have Been