Topps Cards That Should Have Been: 2011 Phillies 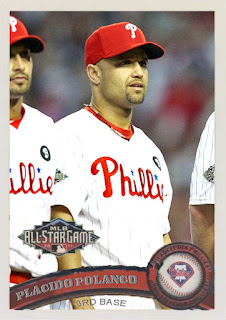 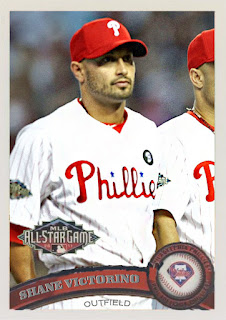 A Philadelphia Phillie has won an MVP for the first time since Jimmy Rollins in 2007. This is a very nice feeling. Unfortunately, Bryce Harper is an MVP for a team that didn't make the playoffs. He's three years into his contract and we're still juuuuust missing the playoffs. This really needs to change.

Anyway, in 2011, the Phillies were the best team in the NL by far, and therefore completely beatable in a playoff scenario, as the Cardinals would find out. There were a lot of Phillies All-Stars, though not all of them made the Update set, mainly because Placido Polanco and Shane Victorino didn't actually play in the game. 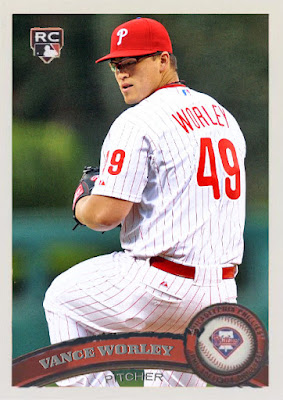 The Phils had a few major players miss the Topps sets in 2011, which is kinda odd. A big one was rookie starter Vance Worley, who usurped the fifth starter spot from Joe Blanton and Kyle Kendrick and became a beloved figure in Philly, known as 'the Vanimal'. 2011 would be his single best season, with an 11-3 record, a 3.01 ERA and a 3rd place finish in ROY voting. Topps would never give Worley a proper rookie card, instead just starting in with a second year card in 2012. 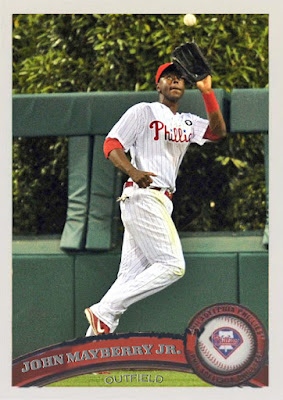 And since they'd already done one for John Mayberry Jr. in 2009, and he didn't play much in 2010, Topps felt they didn't need to make a card for him in 2011, what would become his breakout year. In an extra OF position, in 104 games, he'd hit .273 with 49 RBIs, and some great defensive numbers. As Victorino and Pence would leave, Mayberry would be relied upon more for the Phils, to varying degrees of success. 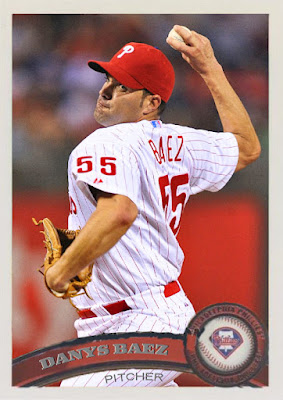 Lastly, some former, and future, All Stars. After some great relief work with Cleveland, Tampa and Baltimore, Danys Baez kept bopping around the majors as a relief piece to anyone who needed help. For his last two seasons, Baez was a relief piece for the Phillies, and delivered his last career numbers in 2011. He was a bit shakier than before, with a 6.25 ERA in 29 games. 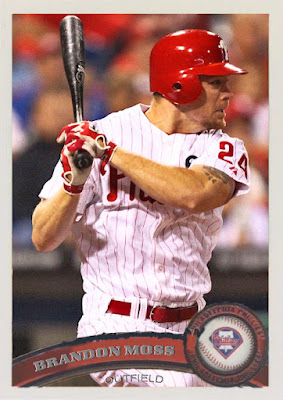 And before he'd become a hero with the Athletics, Brandon Moss was struggling to find a place to latch onto, after stints with the Red Sox and Pirates. The Phils picked him up on a minor league deal before the season, he made it into 5 games, and didn't get a single hit. Dissatisfied, they released him, only for Oakland to pick him up the following year. The rest would be history.

Tomorrow, some truly interesting figures from the 2005 Pirates.