Topps Cards That Should Have Been: 2008 White Sox 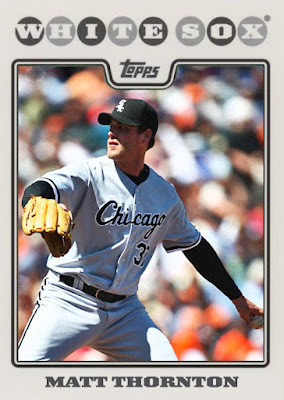 People have forgotten about this due to the actual outcome of that season, but the White Sox won the division in 2008. Like, they made the playoffs, had a strong team, and had some of the strongest pitching energy of the season. Between John Danks, Javier Vazquez, Gavin Floyd, Mark Buehrle and Bobby Jenks, the pitching in Chicago was enough to make this team truly formidable.

However, because Topps is Topps, a few pieces of this team didn't make the cut in Flagship or Update, and I'm gonna go over those today.

The biggest omission is Matt Thornton, one of the more consistent relief pieces of this era of White Sox baseball. Thornton is the most utilized Sox reliever in 2008, and he had a great year, with a 2.67 ERA and 77 Ks in 67 innings, as well as the lowest WHIP on the pitching staff. It's a year that sets him up for a great career, and a 2010 ASG gig. 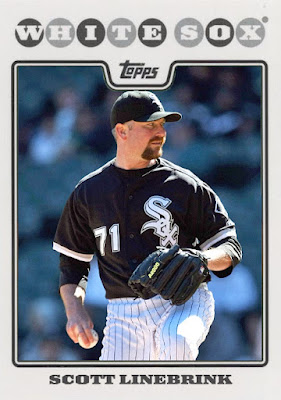 Scott Linebrink was known to me in 2008 for his 2007 Topps card on the Padres, which features an almost nostalgic bit of ugliness on a baseball card. Linebrink, if you'll recall, was damn near unhittable mid-decade with San Diego, and was a chief relief asset on those teams. In 2007 he's traded to Milwaukee, and in 2008 he signs with the White Sox on a 3 year deal and does well enough for himself. His first year in Chicago, he has a 3.69 ERA in 46 innings, and was his last truly great season before a career downturn. 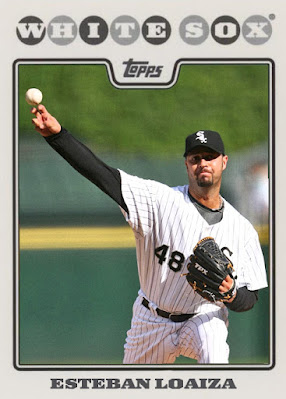 Oh, brother, this guy again. Before moving back to LA and being mired in a potential wife-killing scandal [ALLEGEDLY], Esteban Loaiza is cut by the Dodgers in mid-2008 and signs with his old team, the Chicago White Sox, where he had his breakthrough in 2003. In three brief appearances, in relief, Loiaza had a 3.00 ERA, with 1 strikeout and 2 runs. These would be the last numbers of his career, and he'd instead try his hand at...y'know...cutting fuel lines [ALLEGEDLY]. 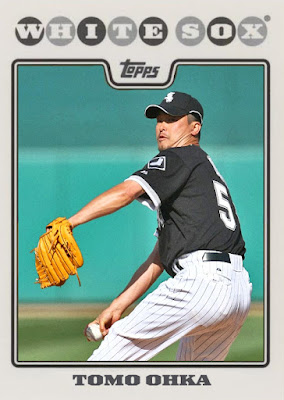 And as for the spring training attempts, we have former Expos and Brewers starter Tomo Ohka, who had gone a bit downhill since his early-2000s heyday. In between stints with Toronto and Cleveland, Ohka suited up for the White Sox in Arizona to attempt to make the team, but, as discussed, the rotation was stocked, and Ohka wasn't gonna cut it. So he sat the year out.

Tomorrow we wrap up this month of should have been's with some 2005 Yankees.
Posted by Jordan at 11:17 AM
Labels: 2008, Matt Thornton, Topps Cards That Should Have Been, White Sox