First Big Move of the Offseason. And it's Smart, Too. 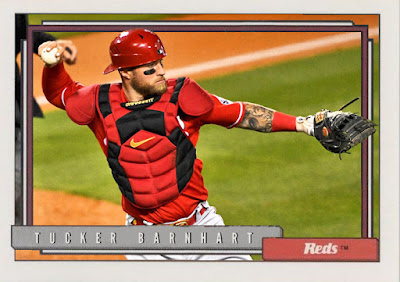 The season literally ended two days ago and players are already on the move. Maybe they're just trying to get some stuff out of the way before a potential lockout, maybe they're being nice to Topps, who knows. But...not only is this initial trade a big one, but it's one that's honestly pretty smart.

Okay, so Tucker Barnhart is one of the best defensive catchers in the bigs, this is a proven fact. The Reds, however, have Tyler Stephenson, and while he had a lot of playing time in 2021, he was feeling like he should be starting a lot of this year, and having Barnhart there was blocking him, especially in the period where Stephenson was playing better than Barnhart. So, Barnhart's a great catcher, but he might not belong in Cincinnati anymore.

The Detroit Tigers have been playing catching roulette ever since Alex Avila left. They've struggled to find a steady, consistent catching option ever since, and have seen either surefires flame out [like Jarrod Saltalamacchia, Wilson Ramos and Austin Romine] or prospects fail [like Grayson Greiner, Jake Rogers and John Hicks]. They did get a nice season out of Eric Haase this year, but after a month of great stuff he sort of buckled back under the radar for the rest of it, and he may be better suited as a backup.

So...the Reds have too many great catchers, the Tigers need a steady, reliable catcher. The deal essentially made itself.

Tucker Barnhart fits in with the Tigers more than you'd think. A lot of last year's Tigers team succeeded on veteran presence, like Jonathan Schoop and Robbie Grossman, and Barnhart is very similar to those two. He's also not a very expensive piece, and they'll get a lot of bang for their buck out of Barnhart. And he's a good addition to a team that's working on becoming a defensive threat again. Meanwhile, the Reds can let Stephenson be the starting catcher, and have less of a crowded bench [so Aquino can actually get some damned playing time].

It's a great start to the offseason. A big piece goes to a worthy candidate. I doubt the subsequent deals are all gonna make this much sense, though.