Topps Cards That Should Have Been: 2007 Reds 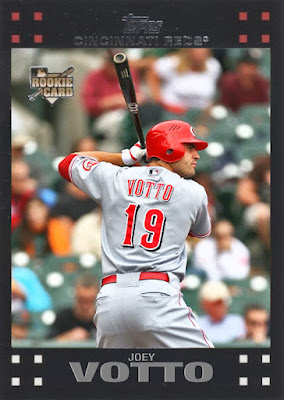 2007 was a transitional year for the Reds. We began to wind down the era of Ken Griffey, Adam Dunn and Aaron Harang, and we began to see some new heroes emerge. For instance, despite his rookie being a 2008 Topps card, Joey Votto played his first games in 2007. In 24 games, he gave Reds fans a sharp preview of how awesome he'd be for them over the next decade and a half, hitting .321 with 27 hits, 17 RBIs and his first four home runs. By the time the 2008 season would start, the 1st base position would basically be his, and he'd be in position for a long, prosperous HOF-quality career. 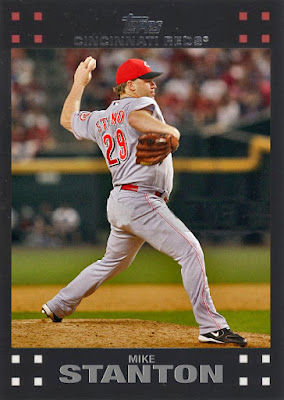 Still pitching in 2007 was former Braves and Yankees relief specialist Mike Stanton. Stanton had played for a bunch of teams since leaving the Yanks, with his best post-Bronx season clearly being 2004 with the Mets. For his final MLB numbers, he'd be the most relied upon non-closing reliever for the Reds, and he'd hand over a 5.93 with 40 Ks in 69 innings. I think I have one or two spring training stint customs for him after this season in waiting. 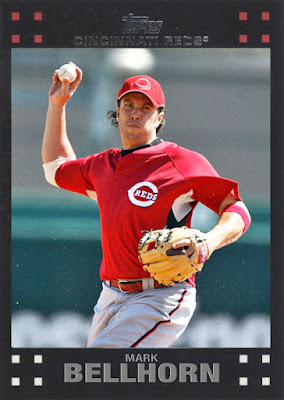 Speaking of spring training stints, Mark Bellhorn was coming off an insanely weird 2006 season. The former Sox infielder and mid-lineup bat had a -11 batting WAR, but also a 11 FIELDING WAR, so he still managed to turn in decent numbers despite hitting below the Mendoza line. So there wasn't a TON of suitors lining up for Bellhorn for 2007. Bellhorn signed a minor league deal with Cincinnati, made it to the majors, and hit .090 in 13 games, with only 2 hits and one RBI. The Reds had better options at 2nd and 3rd, so he was cut fairly soon after and never played in the majors again. Meanwhile, in 2007, a lot of his old teammates would win their second rings with Boston.

Tomorrow, we feature a similar schematic of youth and winning down heroes, this time with the Rockies in 2006. This one features a missed opportunity that I'm sad that Topps never delivered on.

Posted by Jordan at 1:12 PM
Labels: 2007, Joey Votto, Mark Bellhorn, Mike Stanton, Reds, Topps Cards That Should Have Been