Topps Cards That Should Have Been: 2014 Rangers 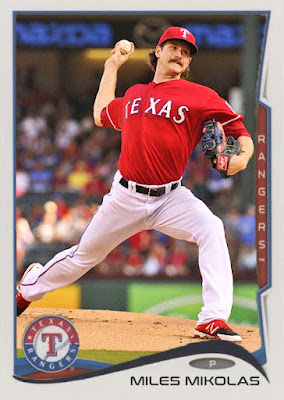 Just like with the Padres post a few days ago, this tale of some odd 2014 Rangers that Topps didn't have time for has to begin with Miles Mikolas.

After another listless year with San Diego, Mikolas made his way to Arlington, where they had some starting spots open [as we'll see]. In 10 starts, Mikolas had a 6.44 ERA, and only 2 wins. These would be the numbers that would bring Mikolas over to Japan, where he'd revitalize his career. 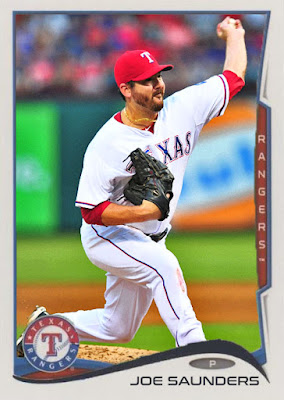 Another starter the Rangers tried in 2014 was Joe Saunders, who we just talked about with some super numbers for the 2012 Orioles. In 2013, Saunders' year in Seattle, his numbers plummeted down to earth, and by 2014 he was going from minor league deal to minor league deal. Saunders got 8 games with the Rangers, and similarly struggled, with a 6.13 ERA, a WHIP over 2, and no wins with 5 losses. He would return to Baltimore to attempt to recover, but it would not work. 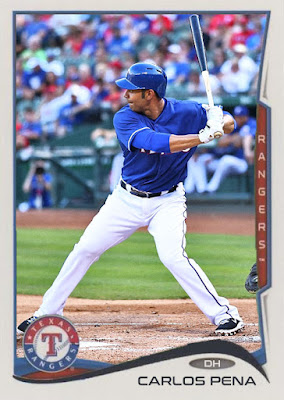 After splitting 2013 between Houston and Kansas City, the heavily depleted bat of once-strong Carlos Pena made it back to Texas, where he began his career in the late 90s. Pena's numbers were a lot different now, and he'd be playing as a DH rather than a corner infielder. In 18 games, his last ones in the majors, he'd hit .136 with one more home run. After the cut, that'd be it for the former Rays all-star. 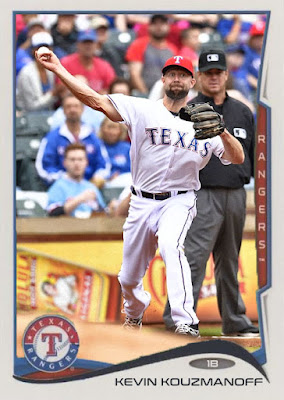 Biggest flex of any of these? Kevin Kouzmanoff, who made his first MLB action since 2011 for the Rangers in 2014. The former Padres prospect may not have been as hot and blog-beloved as he was in 2009 or so, but he surprised everyone by hitting .362 with 10 RBIs and 2 homers in 13 games. He was hidden behind starters for the stretch, but as a backup who was thought to be out of commission, he performed like a champ. Sadly, these were Kouz's last career numbers, but man did he go out hot.
Tomorrow, we go back to 2011 for some Rays.
Posted by Jordan at 2:55 PM
Labels: 2014, Carlos Pena, Joe Saunders, Kevin Kouzmanoff, Miles Mikolas, Rangers, Topps Cards That Should Have Been