Topps Cards That Should Have Been: 2009 Angels 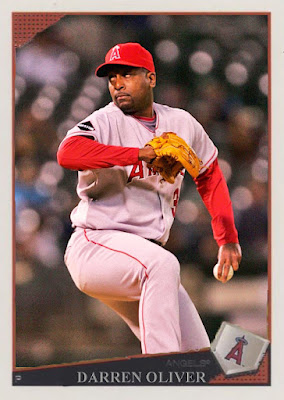 I did a A-Z January with the backlog of Topps Cards That Should Have Been that I've made earlier this year, and I'm doing something similar in November. All 30 days you're getting a different team's customs from a year. So today, you're getting a few landmark players who should have had an Angels card in 2009 Topps.

2009 was Darren Oliver's third and final season in Anaheim, before the 38-year old reliever would go to Arlington to become one of the 'two old men' in that bullpen alongside Arthur Rhodes. Oliver still had some great material left to deliver, becoming the Angels' best relief specialist, with a 2.71 ERA , 65 Ks and 5 wins over 73 innings. Oliver would also have a nice postseason, with 8 Ks and a win between two playoff series, despite some trouble against the Yankees. 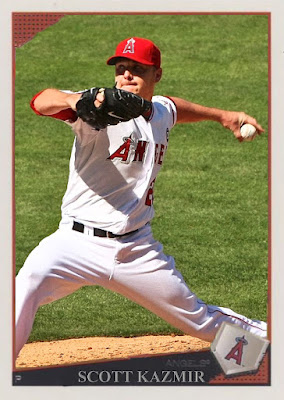 The biggest omission from this Angels team was waiver deal addition Scott Kazmir, brought to the team in an August deal with the Rays that gifted the latter team with Sean Rodriguez. Kazmir's first half-year in Anaheim was something of a success, with a 1.73 ERA and 26 Ks in his first six starts with the team. His postseason starts didn't go as well, with a 7.61 ERA over 3 appearances, beaten up by 2 different AL East teams. This may have been the beginning of his troubles, of which the Cleveland pitching coaches would help out with.

Labels: 2009, Angels, Darren Oliver, Scott Kazmir, Topps Cards That Should Have Been