Topps Cards That Should Have Been: 2009 Blue Jays 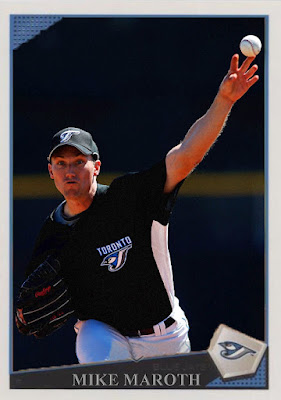 Two cases of wishful thinking involving the 2009 Blue Jays, a team that was able to rehabilitate a lost cause in Jose Bautista, and maybe not so with some other people.

Mike Maroth was a crucial starting piece for the 'too ugly to watch' early 2000s era of Tigers baseball. Through his first four seasons he never had a winning record, lost 21 games in 2003, and somehow became a standout by sucking the least out of the Tigers' many options. There were signs of talent from Maroth, and he did have sharp years in 2004 and 2006 as the team got better, but by the 2006 playoffs, there wasn't much use for him. By the time he suited up for the Cardinals in 2007, an arm injury made it even more difficult for Maroth to succeed, and his MLB days were basically over.

But Maroth was nothing if not resilient, and kept making MLB auditions. In 2009, Maroth tried out for a Toronto rotation that was eventually going to rely on several young options, but his arm woes made him more of a liability to the Jays than even someone like Brett Cecil or Mark Rzepczynski. 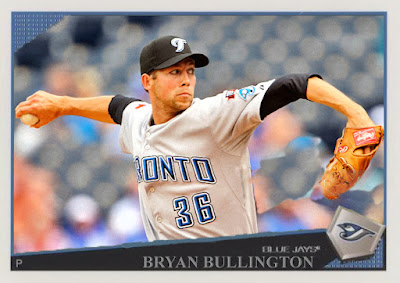 Stranger still was another former fireballer trying to make camp with Toronto, Bryan Bullington. Bullington was the #1 overall pick in 2002, and as high as the Pirates' hopes were for him, by the time of his MLB debut his arm was completely messed up, past the point of no return. As hard as they would try to surgically repair his arm, he'd never become a mainstay with Pittsburgh, and would bop around various farm systems trying to make it. After a few games in Cleveland in 2008, Bullington signed with the Blue Jays, made camp, and had a 3.00 ERA in 4 appearances out of the 'pen, with 5 Ks in 6 innings. Unfortunately, he'd be sent back to AAA after this and wouldn't scrape the majors with Toronto again, instead settling for a shakier run with Kansas City the following year.

Tomorrow, I'll post some intriguing omissions from the 2005 Braves.

Labels: 2009, Blue Jays, Bryan Bullington, Mike Maroth, Topps Cards That Should Have Been