Topps Cards That Should Have Been: 2005 Yankees 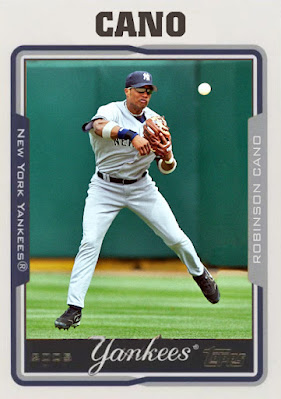 2005 was the last time I saw a regular season game at the old Yankee Stadium. Esteban Loaiza was pitching. It was really damned hot. I think the Yanks won.

This was another Torre team that tried to recreate the 90s success and couldn't, though we certainly tried. More importantly, after the Tony Womack signing was kind of a flop, 2005 was the first year of Robinson Cano's ascent to 2nd. And while the PED charges have tainted the once extraordinary career for the hard-hitting 2nd baseman, you have to admit that his rookie year was still pretty refreshing. 22 years old, hitting .297 with 62 RBIs and 14 homers in an 132 game rookie season, and finishing second in the ROY voting to Huston Street. 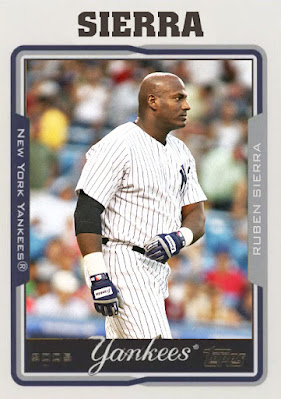 More from Ruben Sierra. 2005 was Sierra's last year of bench-DH work in New York. In 61 games, the 39-year old former Rangers phenom hit .229 with 29 RBIs and only 4 homers. With Giambi and Tino switching off at DH, Sierra mostly was a bench bat, and a kinda shoddy one at that. Minnesota would be next. 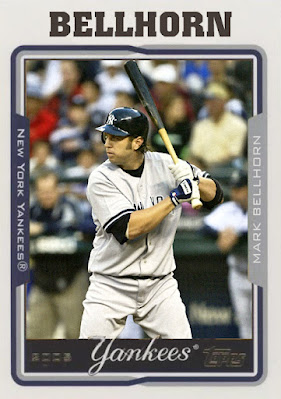 How rare is this? A year after being a crucial member of the Red Sox team that knocked off the Yankees in Game 7 of the ALCS and won the Series, Mark Bellhorn was cut by the Sox in August and picked up by the rivals. A prelude to Johnny Damon, I suppose, but with shakier results. Bellhorn's stuff had dissolved since his Boston heyday, and he only hit .118 with 2 RBIs in 9 games for the Yankees before getting cut again. 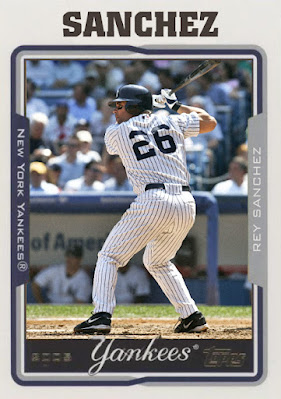 And former Cubs infielder and frequent MLB traveler over the late-90s and early 2000s Rey Sanchez gave his last MLB numbers as a member of this Yankee team. After a strong defensive season in Tampa, Sanchez handed in negative defensive totals, and hit a decent .279 over 23 games. Bit of a whimper to go out on.