Topps Cards That Should Have Been: 2011 Rays 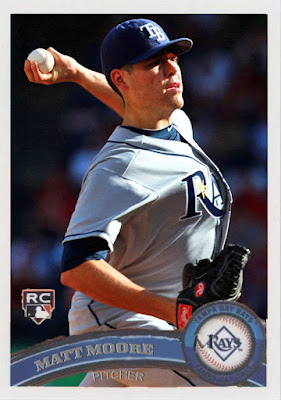 10 years ago, the Tampa Bay Rays were finishing second in the division and squeezing into the wild card race with a lot of homegrown talent. Nowadays they're doing the same thing but finishing first and chasing world series'.
There were a lot of interesting pieces of the 2011 team that either came too late or were too obscure for Topps to really do anything about. For instance, because he came up in September, Topps couldn't make a card of Matt Moore until 2012, a lot like Shane Baz this year. Moore is very similar to Baz, actually, with some scorching late-season starts, a very low ERA, and even some postseason numbers worthy of onlookers, like, oh I dunno, STARTING GAME ONE OF THE ALDS. Matt Moore, with 3 regular season appearances to his name, goes 7 innings with the win in Game 1 of the doomed 2011 ALDS. He's basically exactly Shane Baz. I hope Baz's career goes a little better. 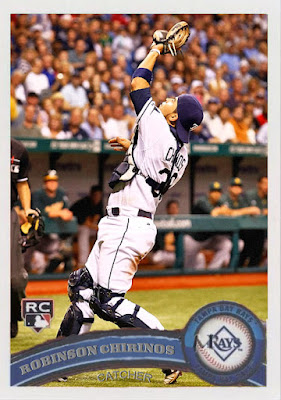 After the departure of Dioner Navarro, the Rays tried a lot of things in replacing him at catcher, aside from John Jaso and Kelly Shoppach. They also tried some younger players, including Robinson Chirinos. In his first 20 games, Chirinos would hit .218 with some decent defensive numbers, but he basically was on as a backup to a backup. After being sent down, he'd gestate before being traded to Texas, where he'd eventually become the starter. 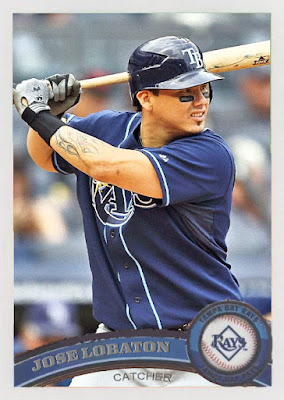 They also tried Jose Lobaton, who the Padres had tried as a rookie a few years prior. In his first of three seasons as an alternate catching option for the Rays, Lobi did well defensively but hit .118 in 15 games. Over time he'd become a great defensive option for the Rays and, eventually, the Nationals. 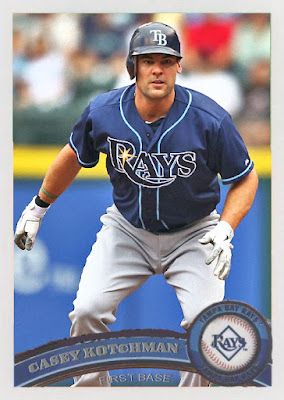 One of the most maddening omissions here, at least to me, was Casey Kotchman, because Topps COULD HAVE done a card of him in Flagship, as they made cards of him in other sets, like Allen and Ginter. Despite being the starting 1st baseman for the Rays, in the season after Carlos Pena's departure, he gets no flagship card, even if they throw a Rays one his way in 2012 [by the time he's already left for Cleveland]. Kotchman, believe it or not, hands in his second-best seasonal numbers of his career, even including his Angels tenure that got him the acclaim prior to the Teixeira trade. In 146 games, he hits .306 with 153 hits and an .800 OPS, pretty strong stuff overall. He'd actually have more RBIs the following year with Cleveland. 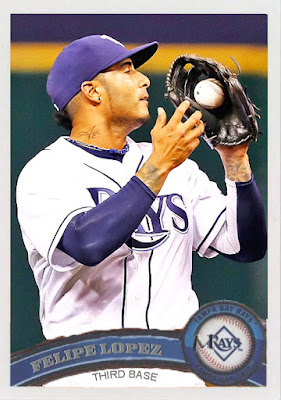 Felipe Lopez, from 2008 til 2011, would sign with a team during the offseason, do well, then get traded to a completely different team midseason, and then repeat. Every year. Lopez played for 8 teams in 4 years. Not cause he was bad, because he was a cheap upgrade. To start his last MLB season, he played 32 games as a backup for Evan Longoria, hit .216 with 21 hits, before promptly being put on waivers and claimed by the playoff-bound Brewers.

Tomorrow, we tackle some stories from the 2012 Red Sox.