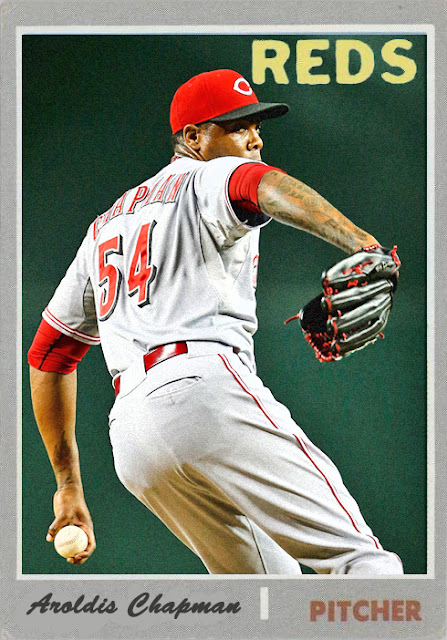 I honestly didn't think that this would happen. I dreamed, I wished, but it was always too improbable. I expected some high seller like LA or Arizona to nab him, and the Dodgers did indeed...however the deal fell through, so back on the market he went.

Then he started talking to the Nationals, and my head began to slam against the wall. The Nationals don't NEED a closer, I thought. They have Drew Storen and he saved 30 games last year. What do they need Aroldis Chapman for?

So today...this trade happens. Aroldis Chapman to the Yankees for four prospects I've never heard of. Hits me like a brick. I didn't see it coming, and didn't bank on it ever occurring. And here it is.

The question now is what happens to Andrew Miller. The guy said a few weeks ago that he'd much rather stay in New York, but now the closing position has been filled. He can't take the eighth inning because that's kind of Dellin Betances' thing. The only other options are to make him do 7th inning work, which he'd be amazing at since he's Andrew Miller, or trade him to a team that needs a closer (which, as I pointed out two paragraphs ago, DOES NOT INCLUDE WASHINGTON).

Either way, the Yankees are playing to get back on top of the East, and Brian Cashman's already saying he's not quite finished yet. If he nabs a low-key starter in addition we should be good to go for 2016. Everybody, save for Baltimore, is rebuilding big-time, and it could be an explosive year for the East, but the Yankees have the best closer in baseball. And the Red Sox have Craig Kimbrel, who's also really good. Matter of fact- Between Chapman, Kimbrel, Roberto Osuna, Zach Britton and Brad Boxberger, the AL East has the best closing pitchers across the board in the league.

The Yankees locked up the ninth, big time. Now let's just see how he does for us.
Posted by Jordan at 5:41 PM
Labels: Aroldis Chapman, Reds, trade, Yankees