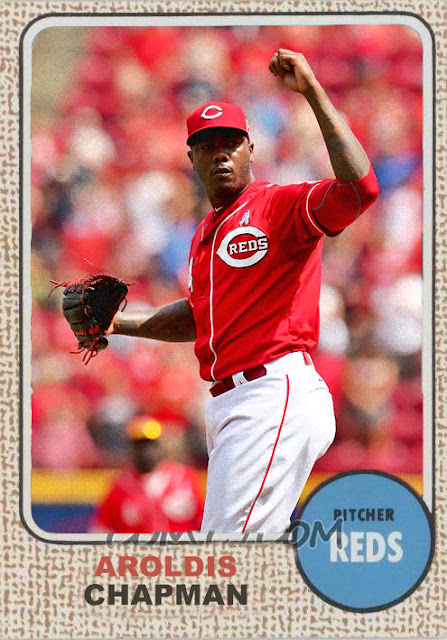 it was only a few days ago that I was lamenting how the Diamondbacks were going to shake up the balance in the NL West, and potentially send either the Dodgers or the Giants hurtling back into obscurity.

Then, a few days ago, the Giants signed Jeff Samardzija. So now TWO teams had made a statement that they were going to compete in 2016. Which left the Dodgers, the team that, for the past decade or so, HAD BEEN competing, pretty damn well to that extent. Were they done? Or were they warming up?

It's weird. Last night I had a dream that Aroldis Chapman was traded to the Dodgers. There were so many rumblings the night before, and so much speculation, that the fact even entered my subconscious, somehow.

And I woke up, checked ESPN. And lo and behold...my subconscious was onto something.

First of all, they got some rotation security last night and signed Hisashi Iwakuma, which was a smart move, because if anything was ailing in the bottom half of 2015, it was DEFINITELY the rotation, and Iwakuma is a sharp, consistent pitcher that threw a no-no this year, and will definitely flourish in LA. That part I was waiting for confirmation on til the morning. But then the Chapman deal happened.

It was vexing to me, because so many people chewed me out earlier this year for not including Kenley Jansen on my Top 10 closers list, because apparently he was dominant, powerful, and worthy of inclusion. However, this trade tells me that he's expendable. Which is...kind of odd.

He had 36 saves this year, still can work a mound, hadn't showed any signs of slowing down, and...somehow he's expendable? It's like the Drew Storen situation. There really was no reason to get a better closer- there wasn't a real issue in the ninth for the Dodgers. But apparently they wanted to cockblock anybody who actually NEEDED a closer, so they nabbed Aroldis so they can have TWO really good closers. One of which, Jansen, will be shoved to the eighth next year.

I mean, yes, it's very smart that they grabbed Chapman, because he's one of the best closers in the league, and his stuff is so good that he deserved to be traded at the deadline this year. But...does this mean they're just gonna trade Jansen? I'm not sure.

Bottom line is the Dodgers are in the race too, and judging by what they're doing with pitching, they want to contend, and might make one or two more moves before this offseason is up.
Posted by Jordan at 2:46 PM