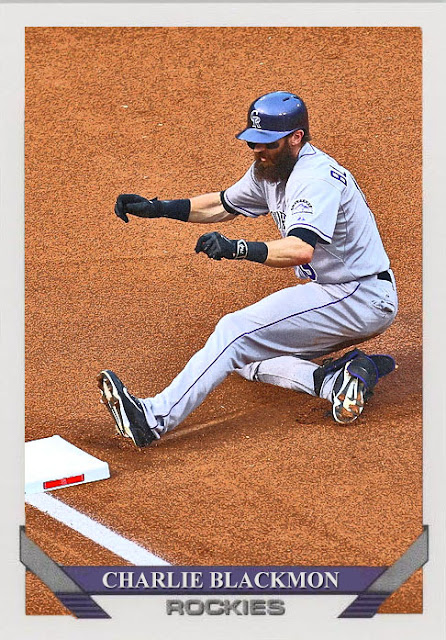 This is actually a really cool Charlie Blackmon custom. I'm glad I made it.

The sad part is that this is probably one of the few really good things about the Rockies' 2015 season.

I've made a lot of really nice Rockies customs this year, because I'm trying to help people recognize the fact that, while there's a lot of awful going on, the team's not all bad, and there are a lot of really great performances going on this year, especially in the middle infield. Charlie Blackmon and Carlos Gonzalez have had a great second half of the season.

But the sad reality is that it's impossible for this team to have a good pitching staff. I don't care if Clayton Kershaw played for the Rockies. He's getting hit and his quality's decreasing. The entire pitching staff looked awful this year, with maybe one or two exceptions, maybe a few middle relievers that didn't entirely screw up.

I honestly have no idea how the Colorado Rockies can turn things around. If I can suggest a place which is a bit more pitcher-friendly, I heard the Montreal stadium's been vacant for a decade or so...

Actually, I do appreciate the Rockies being in Denver, and I don't want a backlash, but there has to be a way to make pitching work without moving the stadium out of Denver. They need to get good pitching, guys that can outdo the elevation problem, if that's even possible. Because if they don't succeed in that, that Expos joke I made last par? Might not be a joke.

Coming Tonight- A relatively big Tampa rookie who had a decent start this year, and whose custom I've been saving since roughly July.
Posted by Jordan at 9:59 AM
Labels: Charlie Blackmon, Custom Cards, Rockies