Where in the League is Dan Haren? 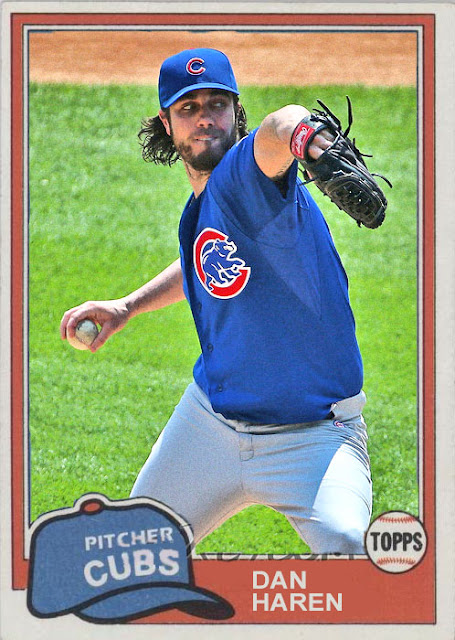 I like the fact that I get to post a card of Dan Haren as a cub. I really enjoy that fact. Because I never got the chance to make one of him as a Marlin.

Why? I thought 'oh, there'll be more time this season, better photos. might as well stick it out til I find a good one.'

You see, I'm very used to Dan Haren, oh, you know, staying in one place for more than a year. Back in his younger days where he was a complete beast on the mound, he stayed in Oakland, Phoenix and Anaheim for a couple years apiece, and he was great for those teams. However, once he landed in Washington, it became a Edwin Jackson-esque contest to see how quickly a team could get rid of him. He spent a year in DC, then spent a year in LA, then split this year between Miami and Chicago.

Plus, he's a free agent at the end of the season, so it's VERY LIKELY that he'll be going somewhere else. So, add all of those teams with his rookie stint on the Cardinals, and it brings his grand total to EIGHT major league teams so far. Plus, he's pitching pretty competently, so it looks like that number is going to grow.

And let it be known- the team switching has nothing to do with his lack of success. Far from it. He's still really good. He's had 100+ strikeouts every year since 2005, and this year is no anomaly. No, he keeps being traded because he's good enough to be a part of these deals.

And for the record, ALL OF THE FOLLOWING PLAYERS have been traded for Dan Haren: Mark Mulder, Brett Anderson, Chris Carter, Carlos Gonzalez, Patrick Corbin, Tyler Skaggs, Andrew Heaney and Enrique Hernandez. That, actually, is pretty impressive.

So, look. I love the fact that Dan Haren is pitching some gems for the Cubs, and I'm glad that he might be pitching into the postseason (fingers crossed). But I'm really interested to see where he lands next, because he could land ANYWHERE IN THE LEAGUE. And keep in mind, with the exception of Chicago because Update hasn't come out yet, I have cards of Haren in all of his uniforms. So I want to see him in another one.

Unless, you know, Theo Epstein breaks the chain and resigns him next year. But let's not think about that.

Coming Tonight: It took a few months, but this second baseman is FINALLY back to playing like he used to, and I couldn't be happier.
Posted by Jordan at 1:14 PM
Labels: Cubs, Custom Cards, Dan Haren, trade