Where did the 2015 Phillies go Right? 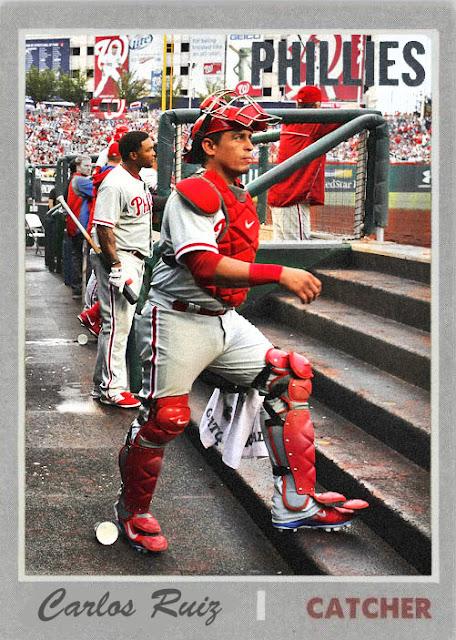 In order to fully articulate how awful the Philadelphia Phillies have been this season, look no further than this custom. Amazing, right? I had to take a photo from LAST YEAR in order to make it. As in, nothing this cool happened to Carlos Ruiz this year.

The Phillies have been atrocious this year, trading away their talented players, getting their replacements injured, and relying on unreliable players, especially in the pitching staff. Plus, they've had to call up a TON of people that might not have been ready. It's a good thing that Aaron Altherr, Aaron Nola, Odubel Herrera and Maikel Franco were all ready, because that hasn't been the case for everyone.

The one Phillies game I went to this year, they beat the Blue Jays, which was pretty damn miraculous, especially considering that this was during the second half, when the Blue Jays were unstoppable. I don't know happened, but they pulled out. It was one of the few times that actually happened.

I have no idea what the Phillies can do to pick this up, because they're gonna have to rely on youth for a WHILE until this whole thing cements itself, so that they don't have to trade all their big guns. They're probably getting the #1 draft pick next year, and they're likely gonna get somebody huge, so they will need to build their foundation NOW so that by the time this kid comes up, he'll fit right in and not flop hard.

The Phillies being good again won't happen for another few years. But I'm not saying it can't happen. It just won't happen in 2016.

Coming Tonight (?)- The hard-hitting shortstop for a team that probably won't be making the playoffs this year.
Posted by Jordan at 9:02 AM