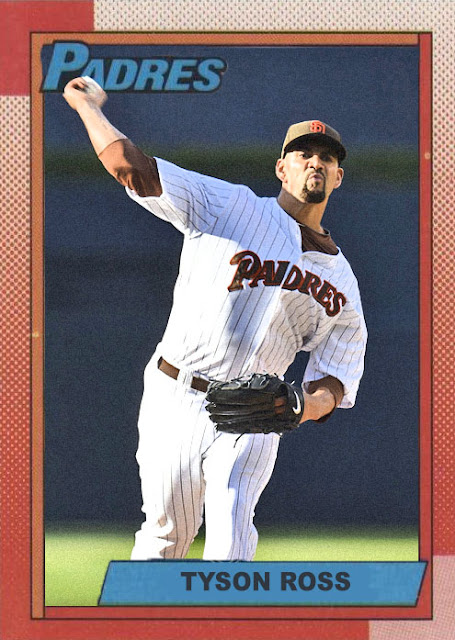 INT.- Padres Clubhouse, San Diego CA--NIGHT
It's a rainy night in San Diego, and the entire team has been smushed into the clubhouse. This includes all the players, the pitchers, manager Pat Murphy, manager-for-one-game Dave Roberts (who is still with the team for some reason), and GM AJ Preller, who is standing at the front of the room, taking inspiration from the Kevin Costner movie Draft Day, which he probably caught on HBO very recently. He slams a cleat against the board and gets the attention of the group.

PRELLER: Okay...you're probably wondering why I decided to call this meeting.
JOSH JOHNSON (in the back of the room, wearing a full-body cast): ...I'm not.
PRELLER (motioning to Johnson to shut up). Look...it's the last month of the season, we've got a couple weeks to go, and we're nowhere near where everybody thought we'd be.
B.J. UPTON: I mean, I'm not surprised. Like, I wasn't even supposed to be in this cockamamie team.
DEREK NORRIS (raising his hand): I'd like to point out that the one guy that is calling this team cockamamie...first of all, dude, you legally changed your name to Melvin!
BJ (standing up): THAT IS MY NAME, BRO! D'you know how many people in Tampa used to call me Bl--job? That's what they thought it stood for, man!
JAMES SHIELDS: Honestly, even 'Bl--job' is a step up from Melvin. Like, who else, you know, who's still alive, goes by Melvin?
PRELLER (banging cleat again): Would everybody give Melvin a break about his name? I mean, honestly, Melvin. If people are gonna make fun of you, don't give them a choice. They already have your offensive ability to work with.

BJ is visibly unamused, while his brother Justin fist-pumps, and high-fives everyone around him. He even high-fives Wil Myers, who strains whatever he'd just gotten off the DL for.

BJ: Hey, why do you have to diss my game?
PRELLER(suddenly jumping onto the desk) : BECAUSE WE'RE IN FOURTH PLACE, *MELVIN!* NOW IS A DIFFERENT TIME!

Preller gets down from the desk seamlessly. A couple people go "oooohhh..."

PRELLER: There is a reason I spent money on all of you guys this winter. Derek, you had a phenomenal season last year. Justin, you nearly brought the Braves back from the dead. Shields, you almost won your team a World Series. But you guys haven't been able to deliver. And I feel like I have to blame it on someone.
JOHNSON: Well, don't blame me, AJ. I've been injured all season, so I couldn't possibly-

Suddenly Josh Johnson falls over in his full body cast and shatters his spine, putting him on the DL for roughly another three seasons.

PRELLER (Reacting to this): ...right. Thanks Josh. Now look...I've fought long and hard about this, but I need to nail one part of this team that's responsible for all of this and I'm going through all of you. And the weakest link is gonna be cleaned the second we hit the offseason. Let me start with the pitching staff.
SHIELDS: With all due respect, boss, it's not us.
PRELLER: That's what I was beginning to get at-
SHIELDS: Look, all of us have a pretty good record. Tyson, you're striking people out, isn't that right?
TYSON ROSS: Damn right, Jim.
SHIELDS: And Drew, you're still striking people out, right?
ANDREW CASHNER: You said it, Jim.
SHIELDS: Hell, even you, Ian Kennedy, are still at least trying to strike people out, regardless of wins.
IAN KENNEDY: Bet your ass, Jim.
ODRISAMER DESPAIGNE: HEY, WHAT ABOUT ME, JI-
Shields (Ignoring Driz): Bottom line is we're doing our jobs pretty damn well, even if we're not winning games.

Josh Johnson tries to get up for an 'AMEN', but topples over again and breaks another part of his body. Somewhere, even Brandon Webb is loving this shit.

PRELLER: So if it's not you guys, it's gotta be run support.
JUSTIN UPTON: Well...not really. I mean, hell, I'm still hitting the heck out of the ball.
GOOD MATT KEMP: I'm with him.
PRELLER: Good Matt Kemp? When did you get here?
GOOD MATT: Oh, sometime after the All Star Break. Look, Aje, I've been doing all I can in the ribbies category, but I'm sorry if it's not amounting to any postseason endeavors. I just have to try harder next year.

Preller holds his jaw open for a moment. Josh Johnson tries to, but his jaw is also broken.

PRELLER: Man, I missed you, Good Matt Kemp.
YONDER ALONSO: What the hell are you saying? Good Matt Kemp used to hit 30 home runs against us every year.
PRELLER: THAT WAS IN THE BEFORE TIME, YONDY! (beat) Speaking of which, why haven't you been performing this season, Yond?
ALONSO: Oh, I have. I just haven't been hitting home runs.
PRELLER: Wait, so...you guys *have* been hitting?
J-UP: Well, yeah. Just not as much as you guys might have wanted.
ALEXI AMARISTA: I mean, I haven't really been hitting, but...I don't think you guys really hired me for that.
PRELLER: NOBODY CARES, ALEXI. CAN YOU AT LEAST PLAY SHORTSTOP?
AMARISTA: ...I mean, I guess...
PRELLER: Wonderful, Alexi. I love it. You're doing great things.
NORRIS (to Shields): You gonna tell him?
SHIELDS: Nope.

Preller paces around for a few more seconds, still in thought.

PRELLER: I mean could it be the bench?
BRETT WALLACE: (scoffs)
PRELLER: Okay. It's not the bench. So what do we have so far. It can't be the pitching, but they don't have run support...but the offense is working, as is the defense...so that leaves the bullpen-

Craig Kimbrel clears his throat. Preller looks at him, steely-eyed, and returns to his point.

PRELLER: So...what you guys are saying is that you guys are all playing pretty decently?
JUSTIN: With some exceptions, boss.
BJ: Stoppit, Bro. I'm right here.
JUSTIN: Fine, "MELVIN."
NORRIS: Look, we're doing an alright job, not really making any blunders. It's just that the other teams are kind of better than us. you can't really fault us for that, can you Aje?

Preller stops, and a spotlight lands on him. An icy silence goes over the room.

PRELLER: Could it be...that *I* was the thing that was driving this team into fourth? I mean, I had all the best intentions.
BUD BLACK (suddenly entering): All the best men do.
PRELLER (looking to Black): Does this mean it's the end for me, Buddy?
BLACK (putting an arm on Preller's shoulder): Yeah, pretty much. You've got another few weeks to ride it out, but we both know nothing's gonna come of it. So I guess there's only one thing you can do...
PRELLER (frightened suddenly): W-what's that, Bud?
BLACK: Move on, Aje. Move on.

With that, Bud Black pulls a Nationals hat out of his bag, pulls out his cell phone, puts the cap on his head, and leaves the room, triumphantly. Preller stands, alone, in icy silence, in a darkened room, the players still there but frozen. Preller sighs, and goes to leave the room. He turns on the lightswitch in the room, turning the "spotlight" off, and bringing the scene back to action.

PRELLER: You can all leave now. Game tomorrow. (beat) The game that never ends.

With that, Preller leaves the room, leaving the players silent and confused.