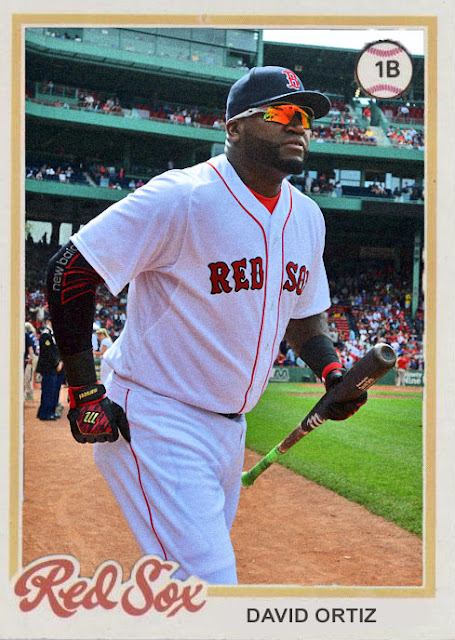 So, thanks to the opener against the Yankees, David Ortiz is now a little closer to 500 home runs. He will likely hit that mark by the end of the season. Right now he's at 495. Normally, as a devout Sox-hater, I would be dead set against this potential milestone, especially considering the fact he might hit the 500th while playing my team. However, it's David Ortiz, so I can make an exception.

Even when they were amazing, I never hated Big Papi. It was always somebody else, like Manny, Youkilis, Pedroia, David Ross. Never Papi. He seemed so likable that I couldn't do it. He's got the right attitude about the game, and he's a definite Hall of Famer when he gets eligible. This guy is an insane hitter, and he's gonna be a Red Sox legend, and even if I dislike his team, I can still appreciate him.

Coming Tonight- One of the last two men standing from the 2008 World Champion team. And he's not even a starter anymore, really.
Posted by Jordan at 9:06 AM
Labels: Custom Cards, David Ortiz, Red Sox