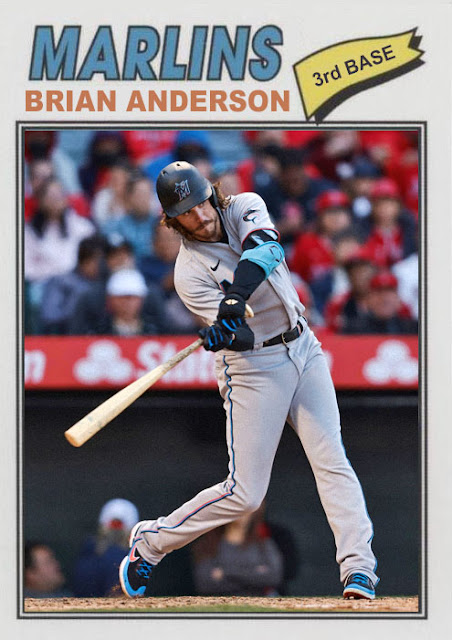 Well, the Miami Marlins went into this season trying to rely on more hitters than just Rojas, Anderson, Cooper and Berti, and we get to the end of this season, and the only people in the lineup that are healthy are Miguel Rojas, Brian Anderson, Garrett Cooper and Jon Berti.

and, uh, and Jacob Stallings but he's doing nothing this year.

I mean, on one hand, the Marlins have to be happy with how the rotation did because they're getting a Cy Young out of Sandy Alcantara and another great season out of Pablo Lopez, plus breakouts from Edward Cabrera, Braxton Garrett and Jesus Luzardo, AND, at least Trevor Rogers is telling us NOW that not every season's gonna be like his 2021. But at the same time, you look at all the people they got to help the lineup this year, and Soler's injured, Garcia's injured, Stallings isn't hitting and Aguilar's gone. And all the kids they've brought up either got injured [Jesus Sanchez, Jazz Chisholm] or struggled at the MLB level [J.J. Bleday, Jerar Encarnacion].

I mean, you can kind of see some pieces of this team that could help in the near future. Nick Fortes could definitely be the starting catcher next year, he's got more of an offensive bite to him than Stallings. Charles Leblanc, who's mostly been covering 2nd since Chisholm's out, is at least hitting .285, and could be a utility piece next year. Jordan Groshans is .333 in 8 games, and he could move Brian Anderson back to the outfield. Bryan de la Cruz at the very least has 10 homers and will probably be starting next year if a contract piece isn't in place. And Lewin Diaz, who's playing 1st full time since Aguilar left, could be a good power piece if he ever figures out how to hit for average.

But it's honestly a lot like 2014, where there's so many youth pieces and options that it's so hard to see where this team's gonna go. There's so many directions, so many answers, and so many young guys that could help out or blossom or whatever. I still think Jazz Chisholm, Jesus Sanchez and JJ Bleday will be the core of this team eventually, it just might take a while, and it may not be as simple as waiting a few years for a competitive squad.

At the very least, a Miami Marlin will win the Cy Young this year. That's never happened before. Unfortunately, at this rate, it might not happen for a while after this.