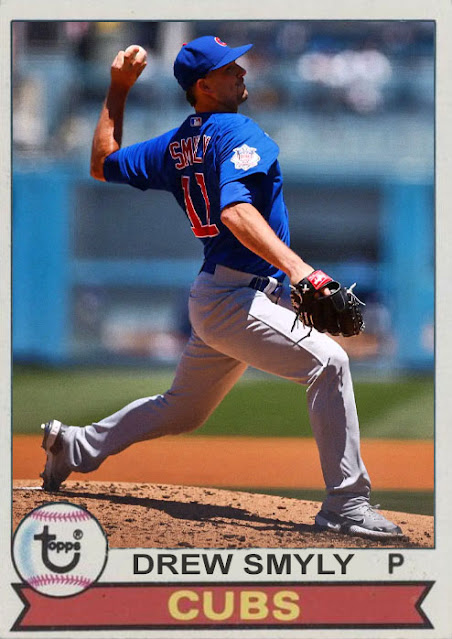 This is Drew Smyly. He's a pitcher for the Chicago Cubs, and he's been pitching for 10 years. Smyly may be the single most inconsequential good player in the leagues right now.

I'll explain this, of course.

Now, there's several types of great players in the game. There are the household names, your Judges, your Ohtanis, your DeGroms, and there are great players that maybe not every lay-person has heard of, like Corbin Burnes, Kyle Tucker and Cedric Mullins, and then there's great players who stay in the leagues for long periods of time and may not get the acclaim they deserve, like Rich Hill, Jesse Chavez and Tommy La Stella.

And every so often, there exists a rare breed of great player who gets a great deal done over a long period of time without appearing to the fans, the sports media, or even statistics. That rare type of anonymous player who never does anything truly bad, but never really transcends his status as a role-player. Who can appear on great teams, even win a World Series, and people will argue they were never really there. You've witnessed players like this without even knowing it. Homer Bailey found acclaim in Cincinnati despite having only one moderately successful season and several years of injuries. Brett Tomko stayed in the league for 11 seasons after being traded for Ken Griffey Jr., and only mustered a 6.4 WAR in that time while still being considered reliable for several playoff teams. It's not just limited to pitchers, either- Skip Schumaker won a World Series with the Cardinals and was relied upon enough to last 10 years in the bigs in trusted outfield roles, but was a subpar defender and mostly did contact work without gaining acclaim even on his team.

And now we have Drew Smyly. Smyly has been pitching since 2012, and has pitched for such great teams as the 2012 Tigers and the World Series winning 2021 Braves. He came up in relief, was thrust into the rotation in Detroit and has been a flexible starting piece in Tampa, Chicago, Texas, Philadelphia, San Francisco and Atlanta. However, Smyly, while relied upon and respected, has rarely put in seasons described by more than 'serviceable'. His best showing happened in 7 games in Tampa during the 2014 season, after being traded for David Price [ironically alongside Willy Adames]. His 2.1 WAR in that stretch is a better mark than any full season Smyly had until this year.

The same thing would always happen. If he stayed healthy, his ERA would rise above 4 and he'd be slowly backed into the end of the rotation, waiting for someone sturdier. If he came on with great stuff, he'd get injured. And yet sportswriters and team personnel would value Smyly, and keep him in the league even during the seasons where he was injured and couldn't suit up for Seattle or Chicago. In this period, I dubbed Smyly the most overrated player in baseball, and while that's one way of putting it, it did slightly undercut Smile's value as a great role player and flexible piece for great teams.

So what happens now that, in 2022, Drew Smyly, the anonymous man, has become one of the best players in Chicago?

What does that say about the team, which has lost players as well as failed to get quality out of Kyle Hendricks and Marcus Stroman? What does this say about Smyly, who's building off a strong season with Atlanta to cement his second act, with a 3.24 ERA and a 5-7 record in 18 starts? What does it say about baseball that someone as sturdy and inconsequential as Smyly is statistically the 5th best player on the Cubs? It's odd. It's very odd.

I'm glad Smyly is having a great season, even if the Cubs aren't. I'm glad he's making the steps to ensure quality even if teams continue to hire him for his worth as a flexible pitching piece. But is a dominant, strong season for Smyly the death nell in the legacy of the anonymous veteran? I guess we'll see.

Coming Tonight: We've reached the part of the season where all that's left to talk about with non-competitive teams are relief pieces. So here's one for the Rangers.