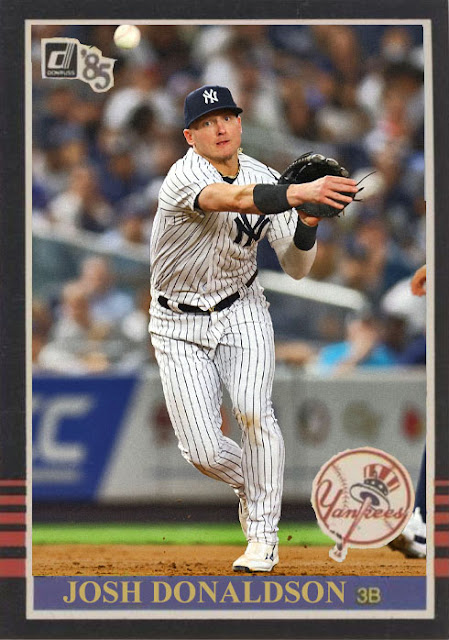 Well, guess what? Looks like the Yankees can still beat the Rays after all.

I've been worrying about this team for the last month because for a whole the pitching dried up, everybody but Judge stopped hitting and I feared the usual bad luck these Yankees teams run into would be waiting for us to keep us from truly dominating. But the one thing we needed was some cushion against the Rays, and the Yankees went and took two from the Rays, each taking 10 runs from them complete with homers.

The power numbers are coming from lots of different sources now. Stanton is hitting, Torres had multiple homers recently, Judge is obviously still hot and is still chasing 60. But now Oswaldo Cabrera is hitting, and is adding some extra padding to his insane defensive numbers. And you have the recent callups like Miguel Andujar, Oswald Peraza and Ronald Guzm-AND HE'S GONE.

The strangest case on this team, especially now that Carpenter's still injured, is Josh Donaldson. I was really worried he'd be a risky contractual add-on, somebody that'd maybe look good on paper but fail to live up to his Blue Jays years. And honestly, Donaldson has made news for the Yankees in a lot of non-savory ways, like starting a feud with Tim Anderson and nearly starting a fight with most of the Rays' bullpen. At the same time, he's managed to not beat up Gerrit Cole, so that's good. Donaldson's having a pretty nice season, with 52 RBIs and 13 homers, in addition to some of his best defensive work in years. Clearly he hasn't been perfect, but I'm glad he's been a productive and interesting piece of this Yankees team.

The Yankees also have been slowly getting pieces back, and have Nestor Cortes back and surging from the IL. They also are FINALLY getting a look at Ben Rortvedt, who came over along with Donaldson from Minnesota, and is supposed to be another great defensive player to back up Trevvy [when he comes back and Higgy inevitably leaves]. It looks like Rizzo will be back soon, and the goal is for Zach Britton to be back in a bit as well.

I...I still think this team could go far. I know it has some flaws and can lose multiple games out of nowhere, but...when they're good, they can score 10 runs against the Rays, which they haven't always been able to do. Maybe there's hope. Maybe the Yankees can do well this year.

Coming Tomorrow- An ageless wonder for a 1st place team.