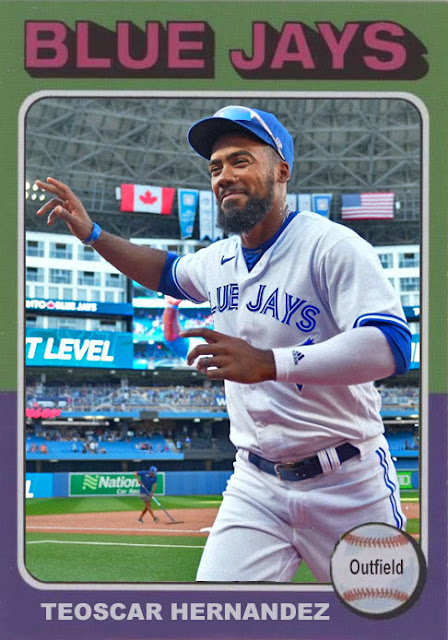 70-59 and clinging desperately to a wild card spot. Baby, if this was the NL you wouldn't even be clinging.

Yet that's how things are going for the Blue Jays right now. The team was once 1st in the wild card standings, now the Rays and Mariners have dropped them to third, and their next competitor is two games back and, ridiculously, it's the Orioles. And it's not like they're in a terrible amount of danger, because at the end of the day they have Vladimir Guerrero Jr., Alejandro Kirk and Alek Manoah, but...there is SOME danger.

Neither of the Blue Jays' deadline acquisitions in the lineup are doing particularly well. Whit Merrifield's only batting .208, meaning they really shouldn't have gotten him. JBJ is, as usual, batting under .200 and at least playing well in the outfield. Meanwhile, the O's just brought up Gunnar Henderson and he's already hitting. The Jays have now lost Yusei Kikuchi's better numbers, haven't gotten much success out of Mitch White and now are trying to make sure Kevin Gausman stays consistent. Meanwhile, the O's have frigging DEAN KREMER becoming an ace. Dean Kremer. The guy who could barely remember what a strike zone was last year, now he's the fireballer.

And the Jays are now 2 for their last 6 games, have gotten Alejandro Kirk below .300 and have to play the Orioles again during the weekend. And as I write this, the O's are already outhitting a division champion.

This team needs its core to emerge. Teoscar Hernandez has 19 homers and 62 RBIs this year, he's gotta be useful for something. Everybody in the starting lineup except Biggio has over 100 hits, this team can definitely make contact. Vlad Jr. has 27 homers and 80 RBIs, and could very well reach 100 RBIs and 30 homers this year. Springer, if he stays healthy, could keep catching pitchers off guard. This could all come together and the Jays could be a strong playoff team.

But...right now I don't know if they're better than the Mariners, Rays, or even Orioles. They are going to have to prove it, unless they're content with sitting out October yet again.

Coming Tomorrow- A guy whose custom I've had saved since May who I am so happy to have healthy again.