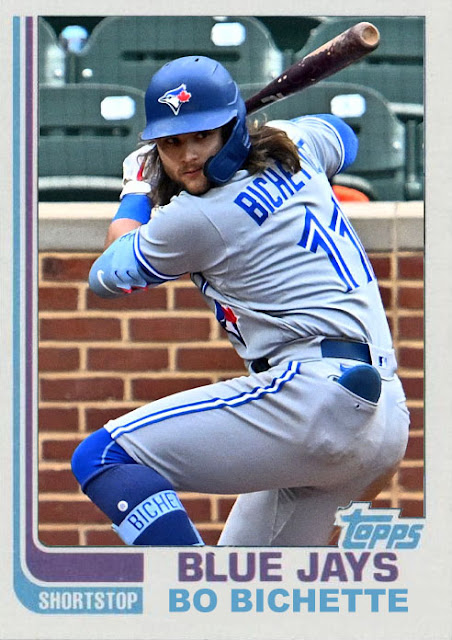 So a good friend of mine recently became a Blue Jays fan.

Yeah, he...yeah there's really no way to talk about this properly on this blog because I'm one of the youngest and hippest people in the blogosphere. But my friend Benny, he uh...for a while he wasn't really in a good position to be really into sports. And now he is. He lives in the Buffalo general area, and last year he went 'TEACH ME ABOUT BASEBALL', and I cracked my knuckles and wrote out an entire google doc entitled 'Baseball, And Why It Is Good', denoting rules of play, teams, players, etc. And he got really into it and this season he decided to get into the Blue Jays, because it's the closest team to him and the tickets are honestly pretty cheap in Toronto.

And so every time the Jays are winning or doing something crazy I'll get a text. 'ARE YOU SEEING THIS?' And I'll run to ESPN or whatever and Bo or Vlad will have done something amazing.

I'm also getting him into cards, slowly. It's tricky because no retail places have any friggin cards, but he's managed to get team sets of the Jays, the Yanks, and the Angels because Trout and Ohtani.

But yeah, my friend picked the right year to get into the Blue Jays. Yes, today was not ideal, but the Jays have reclaimed second place, and are looking at a pretty strong wild card seeding for a competitive playoff bracket. Right now, the Jays are looking at a spot opposite the Mariners, which will be a tough matchup. At the same time, they could end up playing the Rays, which would also be tough, and could slide to 6th seed and play Cleveland. Tough, tough matchups all around.

[Between you and me, I really don't want the Rays to be the team that takes on the Guardians, because then the Rays are gonna win and then the Rays will play the Yankees and THAT WON'T BE FUN. Stick the Rays in the half of the bracket where the Astros are, because then it ensures we don't have another damned Rays-Astros ALCS].

The Jays have gained a lot of momentum recently. Bo Bichette has been hot as hell, now hitting .283 with 88 RBIs, 164 hits and 24 homers. I know everyone has been expecting Vladimir Guerrero Jr. to have the 100 RBI year, but with 15 or so days left in the season, it might be Bo. Guerrero is still heading for a 30 homer year. Alek Manoah is still looking to finish the season with an ERA below 3 and stay in the Cy Young race. Jordan Romano has 33 saves and is 2 away from being the leader in saves by the end of the year [if Clase can slow down]. The team is looking at great things, and could have a nice time in the postseason. They will be surrounded by some tough teams, but they seem to be heating up around the stretch and could throw even the titans for a loop.

And if they win? Man, Benny would love that.

Coming Tomorrow- Some guy that nobody's been able to hit.