My Brother the Red 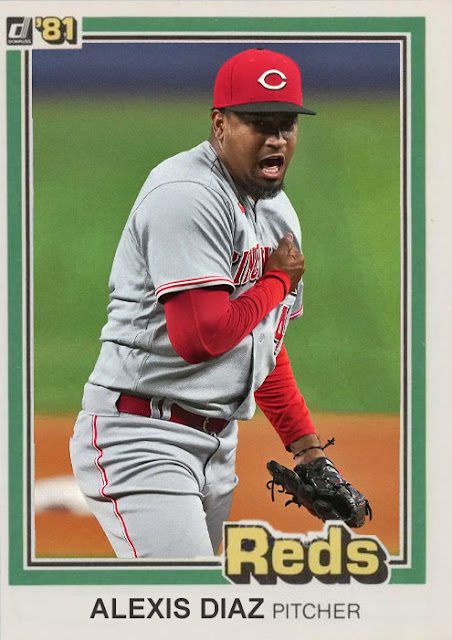 It was very late in Alexis Diaz's strong rookie season that I realized he was Edwin Diaz's brother.

The season had gone by, the Reds weren't doing very well, and sticking to the top of the WAR leaderboards was this unknown sturdy reliever named Alexis Diaz, and I just sort of let it slide. You know, it kinda tracked that the best person on the Reds was some reliever having a good year.

And then the Reds played the Mets...and Alexis' family was there to see Alexis square off against...his older brother Edwin. And then it clicked. Yeah. 1.72 ERA, 70 Ks over 52 innings of relief. That's something Edwin would do.

It's kind of cool that Alexis is embracing middle relief before he inevitably gets crammed into a ninth inning role. Because the Reds certainly are threatening. With no Amir Garrett, no Tejay Antone and no Tony Santillan, the Reds really need an established relief guy in the ninth, and Hunter Strickland is clearly not who he was years ago. And yeah, Diaz has 6 saves already. I honestly think he works best in middle relief as a knockout setup option. Low stakes are good for Diazes. When you put the pressure on, they are capable of success, but maybe not for long periods of time.

As for the Reds themselves...yeah, not a great deal going on right now. T.J. Friedl has finally begun hitting, he's at .275 with a 1.1 WAR. Jake Fraley is hitting, he has 8 homers, even if he's not quite as composed as he was in Seattle. Donovan Solano is still a good piece to have around, even if he's pretty much a replacement player now. Everybody else is either injured or sucking. And to witness a Reds season without Joey Votto, Mike Moustakas, Hunter Greene or Tyler Stephenson? Man, the Reds are lucky they have such a good stadium, because this month is gonna be dire.

The good news is that as bad as the Reds are, they're nowhere near the 100-game-loser they looked like in April. As a matter of fact, because of the lack of true tanking this year, there are more teams close to 100 wins than there are 100 losses, and more teams have at least tried to win now instead of just losing for draft picks. The Reds could have completely mailed it in, but their young rotation, some insane sources of power and some players that have since been traded saved them a lot of heartbreak, and made them a better team than the Pirates. They just couldn't make them particularly good.

Coming Tonight: A former Yankee being relied upon for his defense, mostly because his team isn't hitting save for the two guys everybody comes to see.