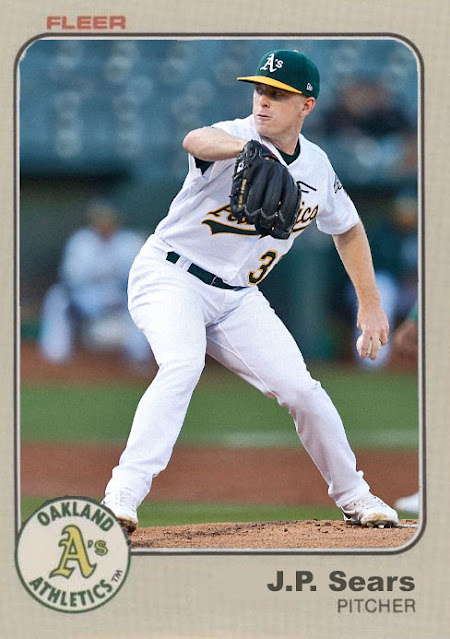 It's just this league-wide trend of the Yankees getting rid of perfectly good pitching options and then those options doing better in other markets than most of the pitchers on the Yankees. I've already talked about Jordan Montgomery, who shouldn't have even been traded in the first place, and I've hinted at J.P. Sears. Sears was a pretty good depth starter for the Yankees, then the Frankie Montas deal happened and Montas forgot how to keep runs down while Sears took off. So far with the A's, Sears has a 4.30 ERA with the A's through 6 starts. Not perfect, and a few recent starts against decent teams have took off some edge, but he's still a great young asset and he's gonna blossom into a trusted arm in Oakland, while Frankie Montas probably plays for somebody else next year.

Then you have Ken Waldichuk, who I think the A's brought up while the Yankees were still in town, as a sort of 'ha-ha' move. Waldichuk is doing alright through 2 starts, he has a 3.60 ERA and 10 Ks. Nothing too shocking so far, but remember that this is still a feeble A's team that is going up against a lot of teams who are built better. Eventually this team is gonna find the tools necessary to outhit Houston or LA or somebody, but until that happens, good pitchers like Waldichuk and Sears might get lit up a bit.

I think the absolute best news is that Sean Murphy is having a great season, lifting the team in a lot of cases and outdoing a lot of young players for the WAR bonus that exists this year. You're also seeing a lot of young players like Jonah Bride, Shea Langeliers and Cody Thomas begin to inherit the team. Langeliers isn't fully well rounded yet but his power numbers are insane and he already has 13 RBIs. So while a lot hasn't worked for this team, and a lot of decent players have gotten injured, there's at least some reassurance for the next stage.

I'm not sure how many Yankees it'll take to get to the next stage, but I guess we're gonna find out.