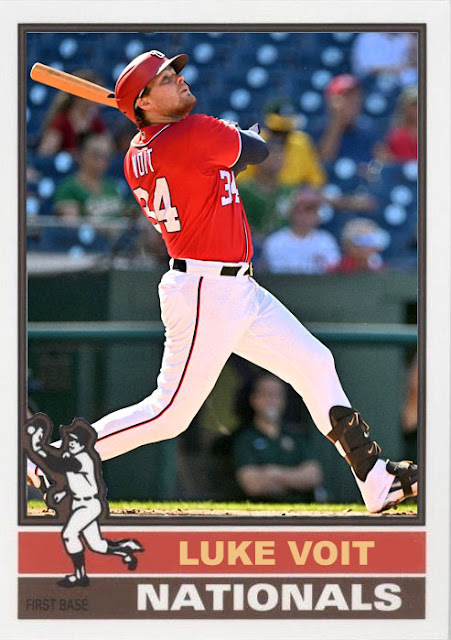 I hate that people needed to be reminded that Luke Voit led the league in home runs in 2020. Like, yes, it's a lot more impressive that Aaron Judge is leading the league in homers into the sixties, but for Luke Voit, who was a good 1st baseman with power but never incredible, to spring into action and hit 22 home runs in 56 games of a shortened season, that's still pretty incredible.

For the record, 22 home runs is also around the number that Voit is shooting for this year, split between San Diego and Washington, over 125 games, the most he's ever played in a season.

I'm guessing it really was that one shining moment for Voit, sad to say. Dude is still an excellent power hitter, but there's a reason the starting first baseman for the Yankees is Anthony Rizzo right now. And there's a reason Voit, who could have been contending in San Diego this year, is starting for the Nats.

Controversially, of the two first baseman swapped for each other at the trade deadline, Voit is actually having the better season. Voit has a 0.5 WAR in his time in Washington, has hit 8 homers and is a useful, if one-dimensional, piece for the rebuilding Nats squad. Bell, who was outrageous in Washington pre-deadline, has a -0.4 WAR in San Diego, with only 3 homers and 12 RBIs in 45 games. Both of these players are known for being inconsistent and streaky, but Bell's heights have been higher. Bell also requires more of a learning curve in new places, and Voit has gotten off to decent starts in both markets he's landed in, though not breathtaking.

If Nelson Cruz does retire after this season, which seems likely, I am guessing Voit will be the starting DH for the Nats going forward. I'm not sure if the Nats are gonna use some control method to cut Voit and make room for younger pieces, and if that's the case it sure is likely, but I actually think this team thinks they can use Voit for a bit going forward. There really aren't a lot of power hitters left on this team, and nobody has a full-season total that can match Juan Soto's half-year mark of 21. At least having Voit, who's a power hitter whose better numbers have passed, gives them SOME power hitting, rather than the depleted lot they have right now. And considering that the legend of Joey Meneses is powering the team right now, who even knows if Meneses will have anything else after the 2022 season. Though keeping around people like Lane Thomas and Alex Call is a nice start for a team trying to reestablish its power core.

The Nationals have been handed so many pieces that can help them in between their next real quest for a title, and Voit is one of them. I know the next few years won't be pretty, but I hope they're not as unpleasant as this year.

Coming Tomorrow- One of the most sought after free agents of the offseason, and how he completely fumbled the ball.