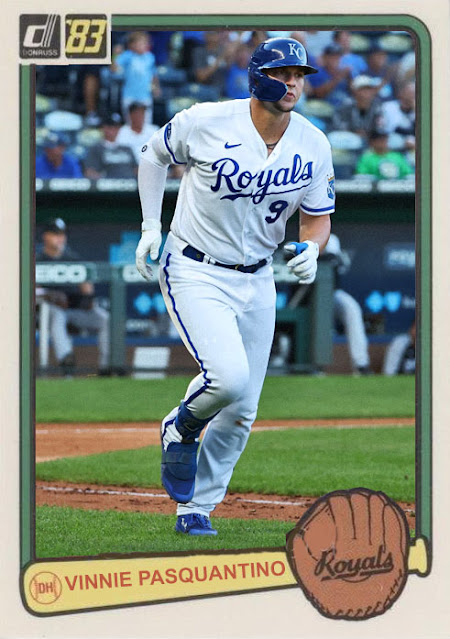 I don't know why, but the Royals have become the team that brings back guys with names we haven't seen in the majors in years. Ya know, they have us a Bubba, and a Richard, and a guy named Foster like it's a 70s variety show, but now the starting DH for the Royals is a guy named Vinnie.

Unfortunately, it's not a guy named Vinnie from Brooklyn. He's from Richmond. Forget about it.

But yeah, Vinnie Pasquantino took the Royals by storm when he came up around July, and has become a solid 1B/DH choice in the wake of Carlos Santana's departure. In 60 games, Pasquantino has 8 home runs, 20 RBIs and 57 hits. Though he may not be the showiest rookie in KC, he's at least a pretty nice power hitter. And on a team where power hitting is mostly an afterthought, even if Bobby Witt and Salvador Perez have 20 homers, it's nice to say there's a good power hitter on the squad again.

I am definitely liking the trend of rookies making the leap to regulars on this team. Nate Eaton debuted just last month and he already has a 1.1 WAR, with 10 stolen bases, 8 RBIs and 22 hits in 34 games. Eaton is one of those prospects that is supposed to run this team, even if they already said that about Witt, and so far he's been a great addition to the team. The Royals are also seeing a lot from Drew Waters, who has 9 RBIs in 22 games. And, wisely, the team is moving M.J. Melendez to the outfield so that he doesn't have to dilute his power numbers with awful catching.

It's very similar to 2011 or 2012, where you can see the next generation of this team beginning to take shape. And I find it funny that we're reaching this point when the Royals have just fired the guy responsible for presiding over the team when they made two straight World Series'. They all know there needs to be a new regime, they all believe Witt and Eaton are gonna help them get there, and they really think this Tigers exec they have for the position is gonna help things out, forgetting what the Tigers have been doing since 2015.

I hope the Royals can start turning things around with all this youth next year. They have the makings of a new dynasty. A lot just needs to go their way.