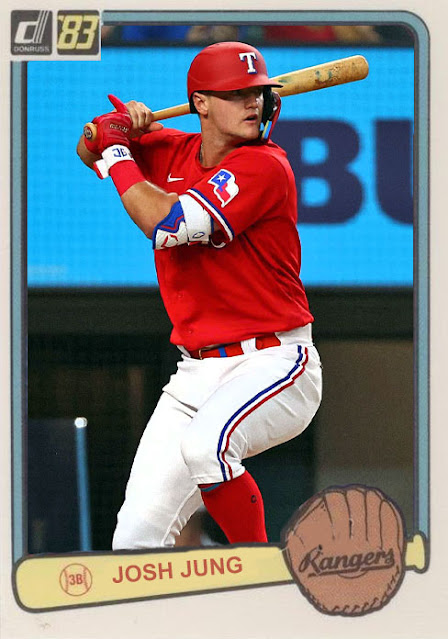 Earlier this month, the Texas Rangers called up one of their biggest prospects, third-baseman Josh Jung.

Anyway Jung's hitting .182 with 3 homers and 6 RBIs in 14 games. Not terrible, but clearly not what the Rangers asked for. After Smith and Duran already faltered around the early .200s. Which just...makes clear the Rangers' prospect issue.

Like, it's not just theirs, it's the big ones they get from other teams that are supposed to be good for them and somehow aren't. The Rangers got Kolby Allard as the biggest piece in the trade that brought Chris Martin to Atlanta, and Allard has responded by handing over some subpar seasons and being held down in the minors this year. The Rangers got Nick Solak in exchange for Pete Fairbanks, and Solak, while good for a little, has been injured for most of the year. The Rangers got Willie Calhoun from the Dodgers in exchange for Yu Darvish, and Calhoun refused to hit for average and is now basically out of a job. Really, one of the few good prospects the Rangers got flipped was Dane Dunning, even if he's had an ERA around 4.50 all year.

As much as fans should be excited about Josh Jung, there's still this recent streak of failure that makes it very difficult. Jung could come back next year and hit 25 homers and make his mark on Arlington, but he could also do what Jarred Kelenic has been doing and take forever to develop in the majors. The Rangers, even with decent guys like Jonah Heim, Nate Lowe, and the imports like Corey Seager and Marcus Semien, need a real homegrown cornerstone to rest on [cause all of those guys came from other markets]. And yes, I am aware that in 3 or so years the Rangers are going to have Jack Leiter [and probably Kumar Rocker] up and hopefully they'll be worth it, but...I'd think that, ideally, they'd have something going by that point.

Even if Jung doesn't do much the rest of this season, I hope he can figure things out for next season, because he's a sharp hitting piece that the Rangers must be glad to have, and I know that this season's lack of competition must have burned them a bit. Maybe he's the key?

Coming Tonight: Yet another awesome rookie for the D-Backs.