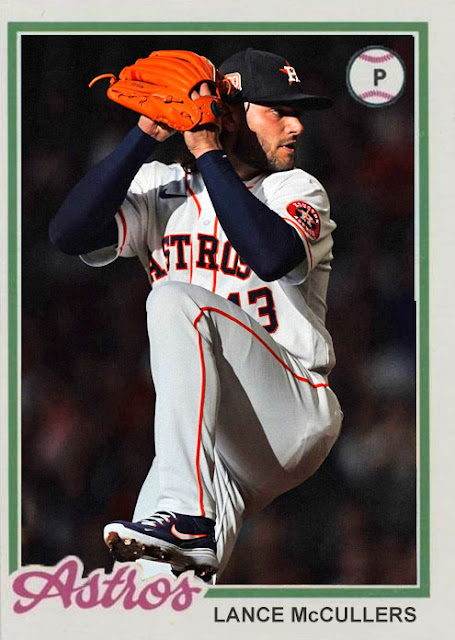 The Astros lose Justin Verlander and Michael Brantley to the IL. If this were a normal team, it'd be a setback. The Astros went and platooned Aledmys Diaz and Mauricio Dubon in center and activated Lance McCullers.

I'm genuinely tired of writing about how good the Astros are every two weeks, because it's always the same. Oh look, something that would inconvenience a normal team! What's that? The Astros have insane depth because their organization is really well run? Almost as if an organization that's so well-run wouldn't need to cheat to win a damned World Series at all.

Like, Lance McCullers was injured for most of the year, and even without him the Astros still had a really nice rotation, with Cristian Javier swinging in as the fifth man. Now McCullers is in for Verlander, and he's back to exactly what he was doing before, with a 2.20 ERA, 3 wins a 6 Ks through 5 starts. And in addition, because the Astros are beginning to phase out Javier, they also have Hunter Brown, who's won both of his first two starts, has only given up 2 earned runs and has struck out 11. And THEY'RE THE FILL-INS. They're the security pieces.

Look, by the end of this year, the Astros are gonna have two Cy Young candidates [Verlander and Valdez], an MVP candidate [Alvarez], a Manager of the Year candidate [somebody oughta vote for Dusty] and a Rookie of the Year candidate [Jeremy Peña]. They will be winning things. But I doubt that is all they intend to win. And once again, I am sensing that the Astros will go extremely far into the postseason, seeing as they will likely be the top-seeded AL team, and they will probably be better than a lot of AL competitors. And...yes, I get it, this may be one of the great sports dynasties we have right now, like the Patriots and Warriors and Penguins, but...I don't like the Patriots or Penguins, and I only tolerate the Warriors because it's been a while since the last time they won one.

The one thing that sets the Astros apart from those teams is that they've only won 1 ring, even if they have been competitive this whole time. And seeing as they have a really nice team this year, they're really gonna try for that second ring, and hopefully they'll be in a position to not get clobbered by a team that caught fire in June or something. But at the same time, the Astros NOT getting to the end would be the more welcome surprise at this point. It's become such a boring option. Right now the most likely outcome would be a Dodgers-Astros World Series, and that'd just be really predictable and not something I'd wanna really watch. Now, something like Mariners-Cardinals or Blue Jays-Braves, that'd be pretty cool.

Or maybe the Yankees getting in there but it'd probably just be me who wants that.

Regardless, the Astros want blood this year and it's gonna take a big effort to stop them. I hope there are some big efforts out there in the postseason bracket, then.

Coming Tomorrow- A red-bearded career contact hitter who's well-loved even as he enters his late 30s.