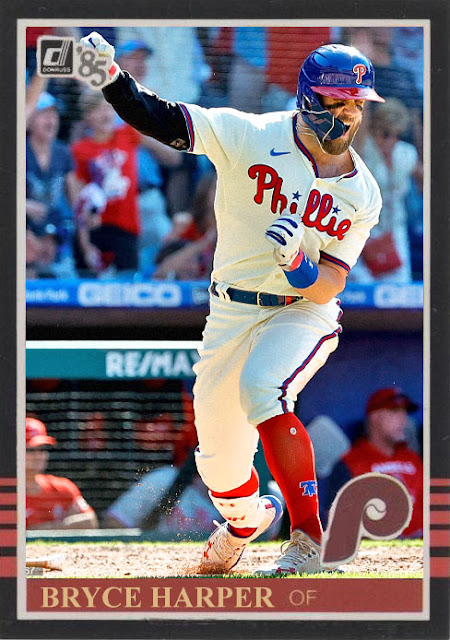 So yeah. September is on, the Phillies have a decent chance of making the playoffs, and Bryce Harper is back. Not a bad shake of things.

...y'know, except for the whole 'dropping series' to the D-Backs' thing, but...it could honestly be worse.

Harper has been hitting pretty well since getting off the IL. No homers yet, but lots of contact hits and RBIs. Brandon Marsh came alive the other night in Arizona, he's now hitting .286 as a Phillie with 14 hits and 8 RBIs. Nick Maton and Bryson Stott chased Didi Gregorius out of the city, and between Stott's 8 homers and 39 RBIs and Maton's 11 RBIs and 15 games, they're a pretty cool infield platoon. Nick Castellanos hit .300 in August, with 12 RBIs and 5 homers, and he's slowly resembling the guy we actually signed. And J.T. Realmuto's having the best season of his career, with his rebounding defensive numbers and his 17 steals in addition to his 67 RBIs.

The worrying point, like usual, is pitching. The pitching was good for a while, but then people started getting injured. Zack Wheeler and Seranthony Dominguez, two of the team's best pitching assets, are on the IL right now. The good news is that Bailey Falter has mellowed into a decent replacement starter, and has a 4.08 ERA after 10 starts. The other good news is that Noah Syndergaard has won 3 out of 5 of his starts and fits right in with other control-friendly pitchers like Ranger Suarez and Kyle Gibson. And, despite getting lit up by the D-Backs the other night, Aaron Nola is still a comfortable ace option who's having a great season.

The worrying detail, though, is that the Phillies have a relatively nice wild card position, a half a game ahead of San Diego, and 3 and a half games ahead of Milwaukee. I know this team's luck. I know that we can be sitting pretty one day and sitting at home the next. I know what happens to Philly sports teams when given the edge. So it worries me, especially when the Phillies have series against the Braves, Blue Jays and Astros lighting the way to the end of the season. Yes, before then they get to play noncompetitive teams like the the Marlins and Nats and Giants, but...as we learned in Arizona, those aren't shoo-ins.

I want to rest on the possibility of my hometown team making the playoffs for the first time in 11 years, but I still see the flaws, and I hope they aren't enough to stop them.

Coming Tomorrow- The White Sox signed a few nice-sized pieces to help them compete this year, and oddly enough this middle reliever might be doing the best of all of them.