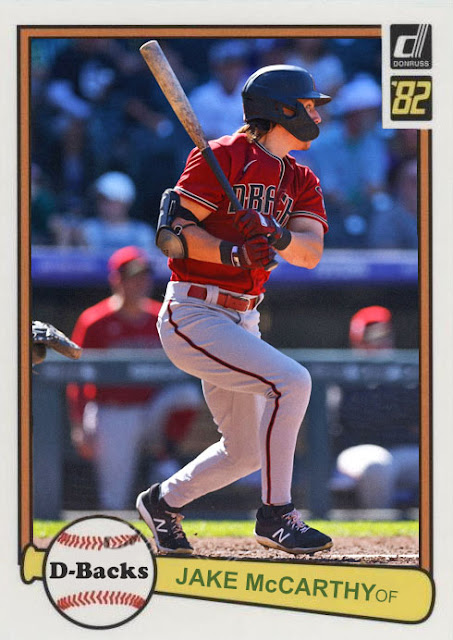 There are some non-qualifying teams that actually have a lot to be proud of this year. I've already talked about the Orioles setting themselves up for a decade of competitive rosters, and I've talked about the Royals calling up rookies that could run the team in the future. But...the Arizona Diamondbacks, even while missing the playoffs and finishing under .500, did a lot right this year, and made more steps forward than steps backwards.

For instance, in comparison to last year, I actually know what the crux of this team looks like. We now have people like Alek Thomas, Jake McCarthy, Josh Rojas, Gerardo Perdomo and Corbin Carroll who we know will factor into this team going forward. McCarthy had some weak initial numbers last year, and now he's hitting .288 with 82 hits and 8 homers in 91 games. Corbin Caroll is hitting .270 and has 13 RBIs in his first 20 games. Even Stone Garrett, who looks to be more of a depth piece than anything, is hitting .317 with 10 RBIs and 4 homers in 21 games. Despite Carson Kelly's injury and Perdomo's lack of offensive production, you're seeing a very full and very flexible D-Backs lineup for the first time in a while.

All this as the rotation continues to be solid and tight. Merrill Kelly and Madison Bumgarner are gonna be around for a bit, and though MadBum is still disappointing compared to his Giants numbers, he still made all 30 of his starts and struck out 112. The goal should still be locking up Zac Gallen, but even if he gets dealt, which is always possible, this team has Tommy Henry doing his best, plus Ryne Nelson and Drey Jameson with shockingly low ERAs through their first few starts. And there's also another year of Zach Davies, Tyler Gilbert who's injured, and part-time starters Taylor Widener, Humberto Castellanos and Caleb Smith.

For a middling, low-market team, that is a super amount of depth, and this team should be happy about it.

Unless there's an overhaul coming, you have Ketel Marte, Daulton Varsho, Christian Walker, Zac Gallen and Merrill Kelly all sticking around. That's a lot of nice pieces to base a team around. And with the Giants on the downslope this year, there is a chance that the D-Backs could move up in the NL West and potentially challenge the big guns next year. It's not definite, but it could happen if enough people stick around.

Wouldn't that be something? If 2022 had a competitive D-Backs and Orioles team? I mean, the Mariners are making the postseason this year, so stranger things have happened.

Coming Tomorrow- Infielder for a team that I really thought was gonna do great things this year.