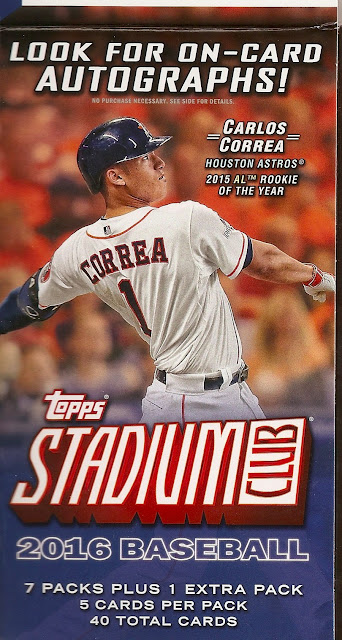 I have to get used to getting products on their opening day, because this is ridiculous.

I overheard somewhere that Stadium Club was out today, and knew I had to make a Target run, and wasn't full expecting Stadium Club to actually be IN STOCK that day. Look, even if Target nabbed Series 2 before I even knew it was out, I wasn't too optimistic.

And then...underneath the boxes and boxes of Series 2...there it was. Nearly glistening.

A blaster of Stadium Club. For me.

Look, I'm still not a fan of only getting 40 cards per blaster, 5 or 10 per pack. I do understand this product costs a lot to make and Topps needs to get back its revenue somehow, but I'd really appreciate a little bit more substance, to at least help prospective set-collectors out a bit.

Still, regardless of my issue with price...it's still an amazing product. If my only problem is how much of something amazing I can get, then you're doing pretty well. 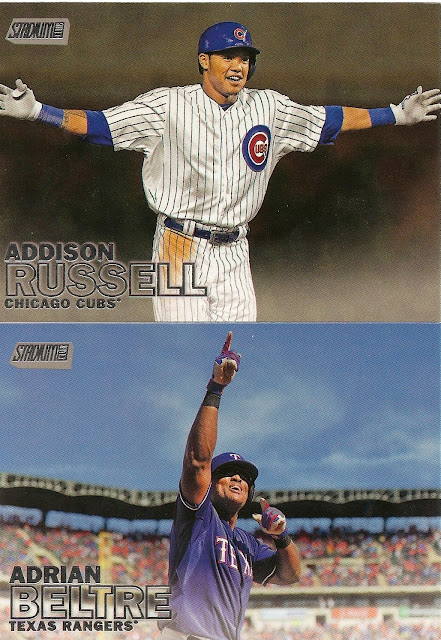 That's just amazing. You crack into a product, and these are the first two cards that come out. Sad part is they might be, like, not even in the Top 20 of photos in this set, but as COMMONS...these are pretty amazing.

I mean yeah, not exactly commons, as one of them will likely be starting an All Star Game this year, but...as base cards go, those are pretty gorgeous.

Russell's is great because it's his entire wingspan, you see his facial expression, and you get good background depth. Beltre's is WAY BETTER, as this is a card that could have been a vertical, boring shot...but with all this space as a horizontal, especially with the background depth, and more room for the point, it becomes truly brilliant.

I'm only two cards in and I'm already in love.

The rest of pack one was all Royals, but it's not like I'm complaining. The Damon's as cool of a static shot as you can get, and plus it's young, baby-faced Damon. Ventura's is a gold foil parallel, which are seeded every 1:4 packs. The Moose is probably my favorite- so much emotion in that card. 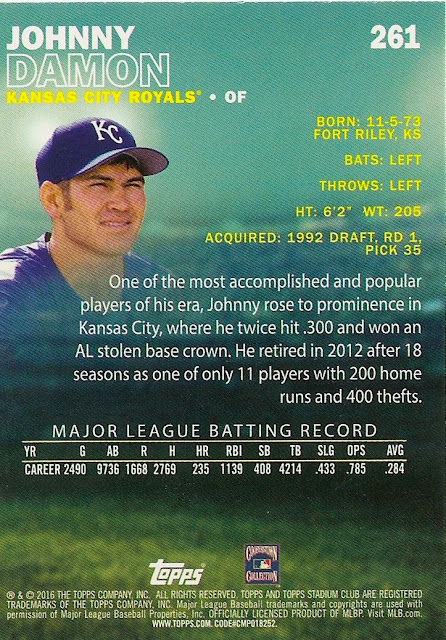 These, by the way, are what the card backs look like.

GREEN! THE BACK IS TEAL-GREEN! You almost never see that in flagship.

No, I absolutely love it, because it pops out. You see them easily. Plus, you get poppy write-ups, a second-photo inset, and full-career stats.

Man, so far they haven't done a single thing wrong (other than the price). 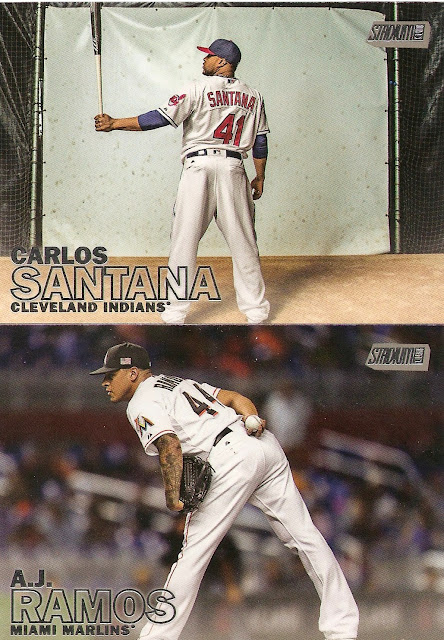 Pack 2- A couple more observations:
1. Man, this design scans SO WELL. It's pretty fantastic, actually. It's a little more shiny and foil-y in person, but here it looks really damn nice. Yes, it's very 90's-Fleer-esque, but that's not an insult- as a Stadium Club design, I place this a few spaces above last year's.
2. That Carlos Santana might be going in the Top 20 on the set, assuming I get some more absolute marvels. That one is just...the right amount of shadow, and GREAT emphasis on background.
3. Even the AJ Ramos looks great- the right amount of zoom-out outside of him. 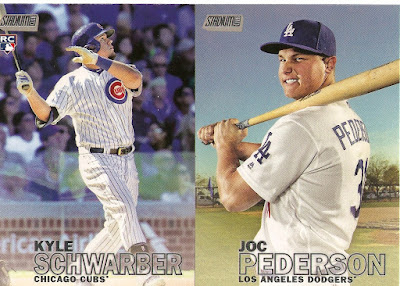 Two generally-huge rookie stars.
The Schwarber was one of the cards featured on the product release, and...I'm kinda surprised I pulled it this early. It's a great card, and if he has more seasons like 2015, he'll be fantastic. The Joc looks even better- it helps that there's background emphasis as well as giving him a nice pose in the foreground, a nice little scowl. 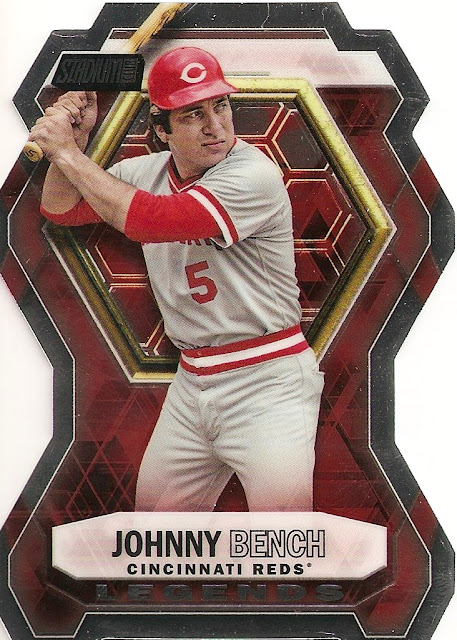 My insert here, a pretty awesome looking LEGENDS Die-Cut of Johnny Bench, is a 1:256 insert pull...which is pretty nice, actually. I believe I pulled a Legends of Johnny Bench in last year's product, too (yay for consistency!)
Heck, the inserts do look pretty cool in this product, especially in a very base-centric issue. 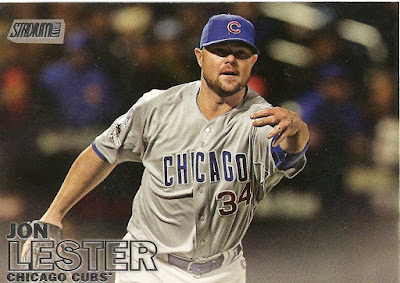 Pack 3- Starting it off with a pretty damn solid shot of Jon Lester. Landscaping this one made it fly a ton better. 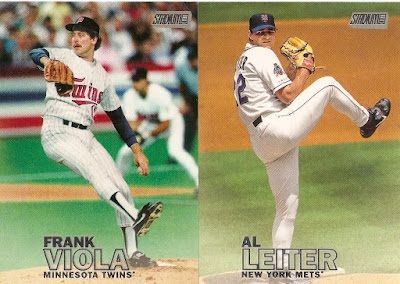 Two guys you don't see in Topps products very often.
Viola's an 80's icon, for his New York mentality toward northeast sports, and for helping the Twins notch a title back in '87. Leiter had some excellent seasons in the 90's and early 2000's for the Jays and Mets. 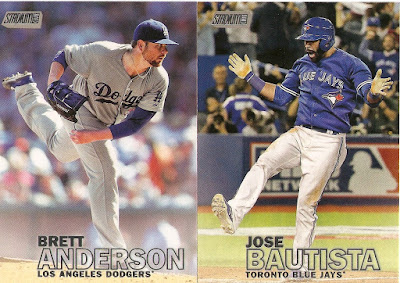 Two current stars. I do dig the detail on Anderson's, even if it is one of the more pedestrian shots in the set. Joey Bats' is pretty damn great- I imagine this was a postseason shot of some sort.

Pack 4- Three awesome horizontals start us off. The Abbott's just a joy because I'm glad Topps is making cards of him again. The Harrison is great because it's zoomed back far enough to get the third base cord (or someone over there) in the picture, albeit blurred. The Greinke is indeed a Spring Training shot, and another gold parallel. So clear, too. 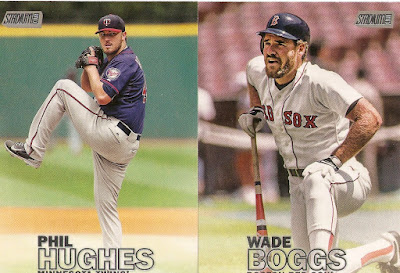 Hughes' is a little closer to a Flagship photo, but the zoom-out is definitely there. I do enjoy the Wade Boggs- I can tell it's from something resembling a late-era-Sox session ('89-92), and the sleeves, and practice bat, really make this one stand out. 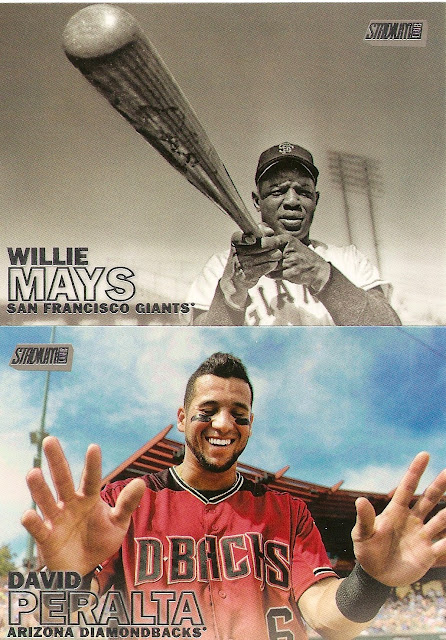 The Mays...not only does it work so well in B/W, not only is this a Mays photo Topps has never printed before, not ONLY is this an awesome shot...but that is the Bat Barrel Shot That Ate Pittsburgh. That is the crown jewel of bat barrel shots- move over 2009 Goudey.

The Peralta MIGHT be even better. I say might, because the Mays may be a Top 10 shot, but the Peralta just looks so fun, so sunny, so detailed and nuanced that I can't help but love it. 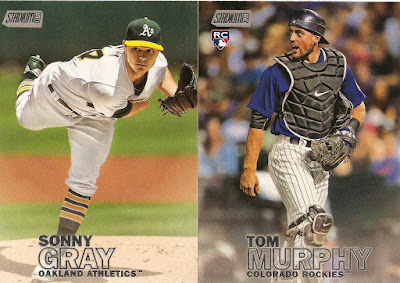 A few lower-key commons. Gray's socks are fantastic here, and almost take me away from the sweet windup. Tom Murphy's is one that was captured at the right moment (with the facial expression), and it's a pretty sweet card...even if I'm not 100% who he is. 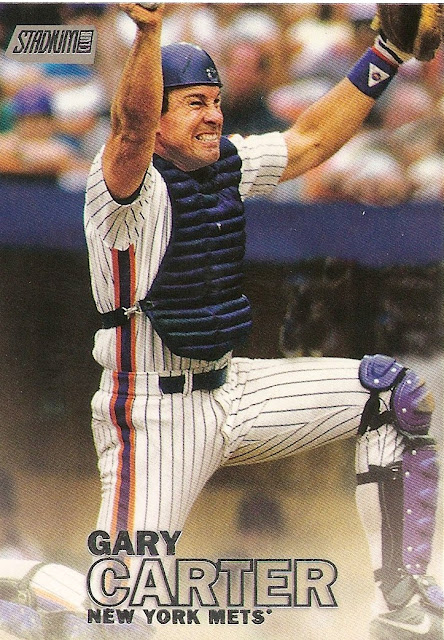 A really impressive shot here of Gary Carter in mid-celebration. Shots like this make me adore this incarnation of Stadium Club. The legends don't neeeeeedd to be there, but the fact that they are, and Topps can do THIS MUCH with them, is pretty amazing. 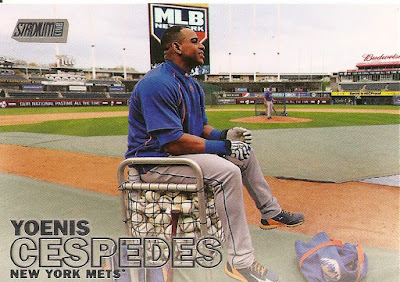 Pack 6- This shot of Cespedes is pretty amazing. I'm not quite sure what stadium this is, but it's an amazing shot, with a TON going on in the background, while still getting some poignant stuff with Cespedes on the ball bucket. One of my favorites thus far. 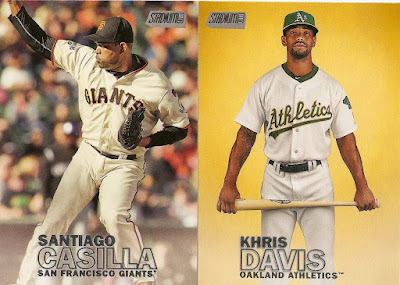 Bay area heroes. The Casilla has just the right lighting, and I love his facial expression. Khris Davis' is a 2009 OPC-esque picture day shot, but it's still a nice static one, similar to some of the photo shoot ones from the early 90's sets. 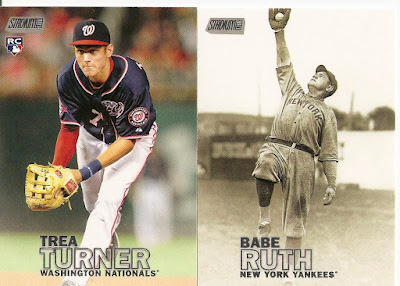 Trea Turner's rookie card is a pretty nice one, but...I've never seen that Babe photo before, and it's pretty outstanding, especially in Sepia. 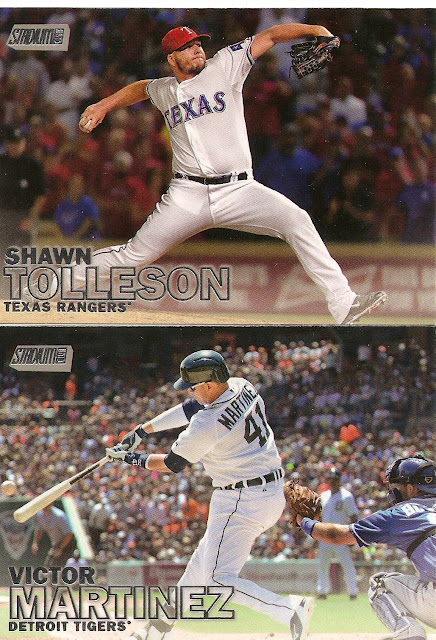 Pack 7- Some more pedestrian landscape shots. Tolleson's is kind of normal, and at least V-Mart's is a solid behind-the-plate shot.

Three cards of fringe guys to bring up the real. I love the Paredes one, even if he's not exactly relevant this year. Cameron Rupp's is a gold parallel, and also a great shot of the primary catcher for my Phils. Almonte's isn't bad, but pales in comparison to the other two. 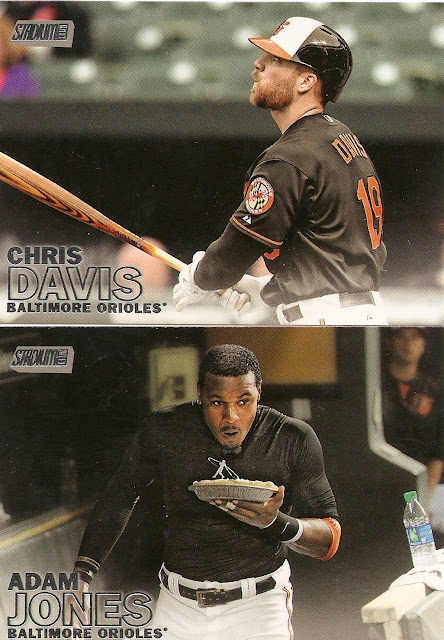 Pack 8- Two generally stunning Orioles. Davis' is great because it's a zoomed in shot of him following one out.
Jones' is something truly special. In Baltimore, they have a tradition of celebrating the game-winner or walkoff-er with a renegade custard pie to the face, usually supplied by Jones. So, here's Adam Jones sneaking his way onto the field after the game with a pie. Truly brilliant moment, and one of the most fun little traditions ever captured on a baseball card. 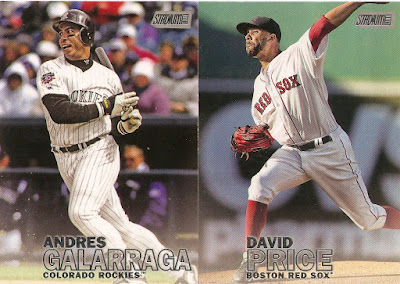 Two more cool base cards. Galarraga's a great one, as he's in a Rockies uniform and everything. Price's is pretty nice- I believe that one might be from April and everything. 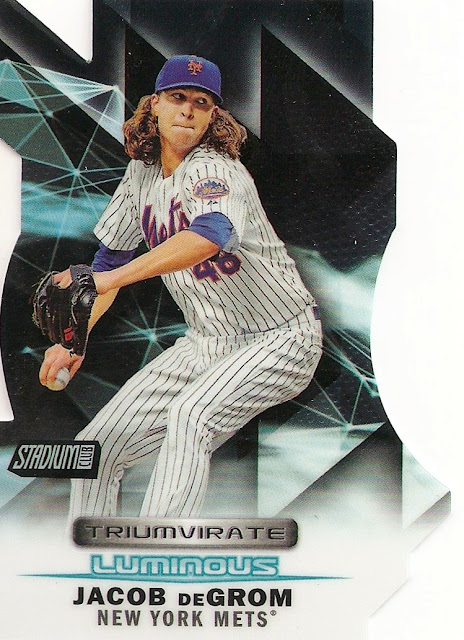 Still Stadium Club would be incomplete without a Triumvirate insert- this one, a Luminous (1:256) insert of Jacob deGrom. Pretty cool design, great choice, and I'd love to imagine how this one fits with the other two.

So, needless to say I'm pretty blown away by Stadium Club this year. The base cards, photos and all, are fantastic, the inserts still pop, and there's so much in every 5-card pack that can blow me away.

It's an amazing set, and I had so much fun ripping this blaster...which means I might have to get more soon.
Posted by Jordan at 4:48 PM
Labels: 2016, Blaster, Product Review, Stadium Club, Topps