June in Review, Ft. (Who Else?) The Texas Rangers 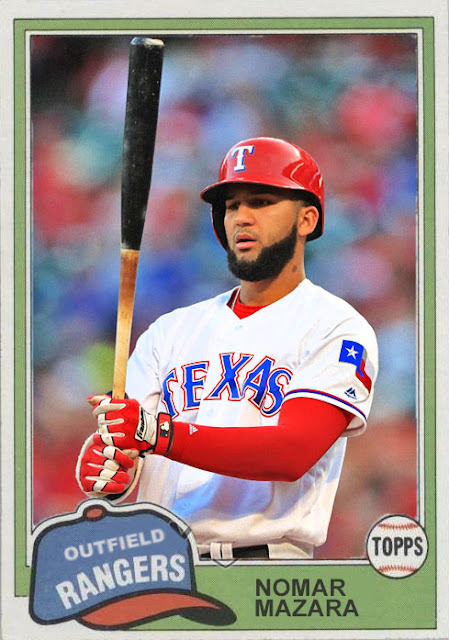 Well, as of...an hour ago, we're officially into July. 2016 is half over. Sound the alarms. But, more importantly for the sake of this post, June is over. Which means now we get to seal it up and talk about it.

First of all, let's go over the 5 predictions I made for June. Let's see how they stack up:

1. Salvador Perez' DL Stint to not rupture the effect of his season. Well, as he's currently back in full force, like nothing happened, you can say this came true...but at the cost of Lorenzo Cain.
2. Juio Urias to finally find his stuff and come into his own as a Dodger. Getting there, definitely- he's winning games, throwing strikes, all the good stuff.
3. The Orioles stay in the race, and not sink to the bottom of the division. Definitely yes- they're strongly holding onto first, and hit a TON of home runs in June.
4. The Blue Jays and Cardinals to sink lower than 3rd. Jays are in third, Cardinals are in 2nd but dropping fast. Not a definite spot-on prediction, but more than just a 'no'.
5 (and this is a longshot). Tommy Joseph to become so much of a powerhouse in Philly that the Phillies have no choice but to DFA Ryan Howard. I wish, man. Joseph AND Howard are kind of ineffective right now.

Now, onto five things that took me, and most fans, completely by surprise this June:

1. The Absolutely Unstoppable Texas Rangers. Man, talk about a team having an unstoppable month. These guys took the slight lead they had in May and ABSOLUTELY ran with it- the entire team came alive, with Ian Desmond, Rougned Odor, Adrian Beltre and, yes, Nomar Mazara all giving unstoppable stuff. Heck, Jurickson Profar even gave some good stuff off the bench for a little while. Only the injuries to Colby Lewis and Yu Darvish brought the team down a bit, but they're still ahead, and have only slipped a tad.
2. The SPONTANEOUSLY UNBEATABLE CLEVELAND INDIANS. Seriously. The Indians have won THIRTEEN GAMES IN A ROW. Perhaps it was spurned by the Cavaliers winning the NBA title. Maybe it was just a spark that was waiting to ignite. Still, for most of the most, the Indians have had 1st place locked TIGHT. The lineup's clicked, Lindor is leading the charge, and Kipnis is back to his old self. Plus, Carlos Carrasco's back from the DL, and he, Danny Salazar and Trevor Bauer are all ELECTRIC. This is one of those surprises that I'm very, very pleased with.
3. The earth-shattering fall of the White Sox. This is a sad one, as the Sox had so much momentum in April and May, only for everything to fall apart. The pitching completely collapsed, even with the addition of James Shields. Injuries began to strike, in the worst moments. Tim Anderson's call up didn't do as much as people thought. Todd Frazier and Adam Eaton could only do so much, and the rest of the AL Central caught up and surpassed them.
4. The youth movement KILLING IT in Pittsburgh. Two straight starters have been brought up, Jameson Tallion and Chad Kuhl, and have brought the formerly-depthless Pittsburgh rotation into the spotlight as one that must be counted on. Tallion won over a still hot Noah Syndergaard. Kuhl won over a just-DL-bound Clayton Kershaw. The momentum for a return to 2nd is THERE, and these pitchers are fueling it.
5. Tonight, Madison Bumgarner started a game as a DH for the Giants. Intentionally. Man, I love baseball.

In the inverse corner, five things that didn't surprise ANYONE this month.
1. Giants and Cubs remained in first.
2. Twins and Braves remained in last.
3. The Astros, a team that made it to the ALDS last year, did not stay at the back half of the standings for very long.
4. Nelson Cruz, Chris Carter and Edwin Encarnacion are among the Home Run leaders.
5. Stephen Strasburg ended up on the DL (sorry, but it happens every year when it's most inopportune)

And finally, Five things I'd like to see happen in July:
1. No absolutely out-of-nowhere choices for the All Star Game.
2. Clayton Kershaw's and Stephen Strasburg's DL stints to be quick, ineffective, and to not mar their overall 2016 efforts.
3. Something resembling a New York Yankees comeback
4. Ichiro to get those last 12 hits and absolutely cement his case for Cooperstown.
5. (this is technically August but still) a nice, clean trade deadline deal-fest that doesn't rob any team I care about of any star players (which means...Aroldis...Andrew...Carlos...staaaayy put...)
Posted by Jordan at 1:12 AM