Pariah of a Piss-Poor Trade Deadline 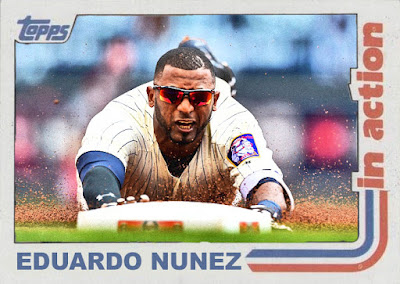 As you can see, when Eduardo Nunez is one of the bigger names swapped before the deadline, you know they're having trouble making deals.

I mean, Aroldis Chapman, Drew Pomeranz, Fernando Rodney- there have been a couple, but, ASG nod notwithstanding, Eduardo Nunez doesn't exactly have a ton of star power, especially for a guy dealt three days before the deadline.

However...what Nunez will do as a member of the Giants will probably affect, in some way, the rest of the season.

The Giants have been dealing with injuries/slumps with Joe Panik and Matt Duffy, two guys that were supposed to make a killer infield this year but have only ended up making it an 'alright' infield. You put Eduardo Nunez into the equation...and SanFran can breathe a little easier. He can play second base, he can play third, he can play short when Crawford's got a day off. he gives this infield a ton more depth, and a ton more flexibility going into the postseason.

I mean, this does kind of shoot the Twins in the foot when it comes to THEIR roster flexibility...but they're not the ones going for a postseason this year.
Posted by Jordan at 3:53 PM