Don't Call it a Comeback...because it really isn't one... 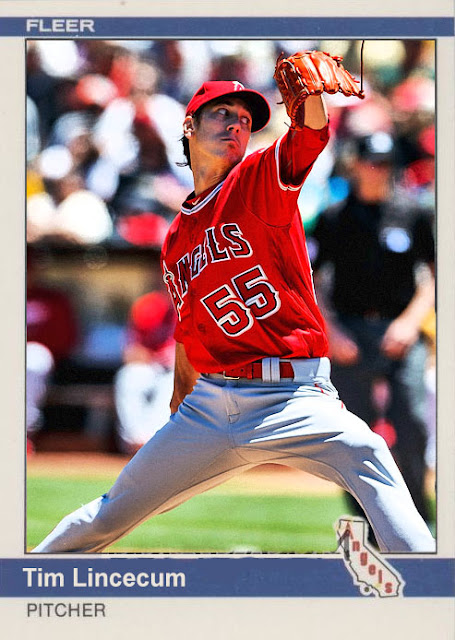 Tim Lincecum, for a 2-3 year radius, was one of the best pitchers in baseball by far, bringing an entire rotation and team to the forefront, and winning three World Series rings in the process.

However...after a while, Tim Lincecum, as some of the greatest pitchers have, lost his stuff. He came back season after season and people were hitting him, and he was showing up like a shell of his former self. And it was very sad to see him float down the rotation to 2nd starter...4th starter...5th starter...and into the bullpen...and off the team. It was very sad, because for a guy who won two Cy Young awards, you never want this to happen. This was essentially the Denny McLain effect, or the Mickey Lolich effect.

So...Lincy drops out, while still being able to occasionally throw strikes, and even no-hit the Reds on two occasions, even during his slumping years. And he sits around...waiting. And then, somehow, the Angels picked him up, gave him a chance, and threw him onto their rotation.

Now...in most movies, this would be built up as the ultimate comeback, with so much riding on it, that the eventual success in that game would be so triumphant that fans would run onto the film, and you'd have to cut to Pat Morita nodding his head approvingly in the crowd or something. However...this is real life. I have to keep reminding myself of that whenever I hear about the election, but this is INDEED real life.

So...how has Tim Lincecum done on the Angels?

Look, his ERA is not impressing, and his record isn't very impressive either, but he's still throwing strikes and doing what he can- it's not the Wandy Rodriguez situation where you bring him in for one game and he gets hit on every goddamned pitch. He's...okay. Not great, but okay. Employable, I guess.

The Angels right now are in last place, their top starter, Garrett Richards, is out for the year, and their other top starter, Jered Weaver, has lost his peak fastball. Their lack of pitching help has been dooming them this season, so even if Lincecum can help a little bit, it's fine. It's doable.

It's not the COMEBACK OF THE CENTURY or anything (that would be Rich Hill), but it's still a nice touch that Lincecum is still pitching, and still trying to strike people out years after his prime.

Coming Tonight- Speaking of Lincecum's former team, a guy who's been doing an adequate job for a little while, and has finally been breaking out in the last two years.
Posted by Jordan at 11:42 AM