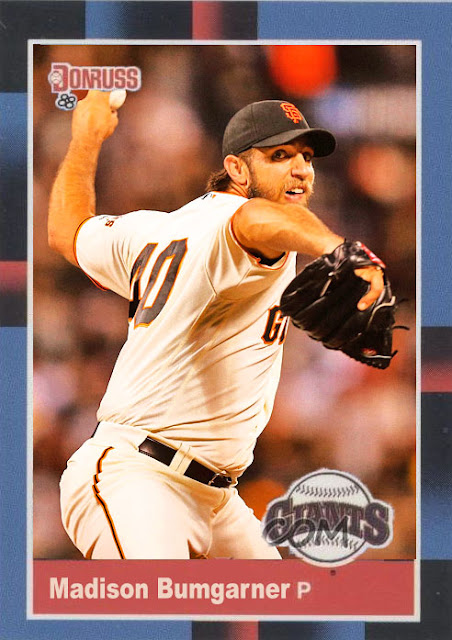 I'm still blown away...this guy is one of the best pitchers in the NL, he's under 30, he's already a strikeout king, and the other night he was the Giants' DH.

Not since Micah Owings have we seen someone so eager to hit, as a pitcher- of course, MadBum's a little better, because he's a WAY better pitcher than Micah Owings was.

Look, the fact that Madison Bumgarner hasn't snagged a Cy Young award yet is a surprising one, yet this season might be the one that nudges him over the edge, as he's already having a fantastic season with a great rotation, his team's winning, and he's already hit a ton of home runs. He's making the right kind of progress, and it doesn't even involve him mowing 'em down into the postseason (yet).

Still, the NL Cy Young race is pretty damn tough this year- Bumgarner, Kershaw, Jake Arrieta, Stephen Strasburg. The second half of the season's gonna make it pretty clear who's ahead of who, and hopefully Bumgarner's gonna go even bigger.

Coming Tonight- I don't know how long this will last, but at least I'll have been able to say one of the greatest closers since Mariano Rivera got to play for my team.
Posted by Jordan at 3:16 PM