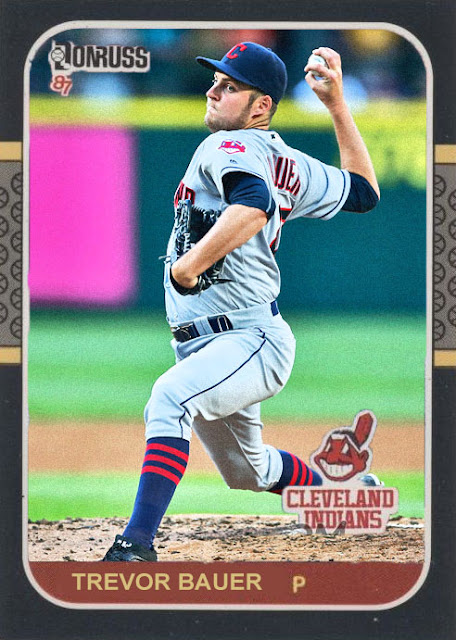 The Royals...are in fourth place, and completely out of the race.

The White Sox are in third, but are so far behind the second place Tigers that we've all kind of counted them out.

So...that leaves the Cleveland Indians...with a nice stronghold on first place. And I love the fact that I am saying this phrase in 2016, a year I thought would be dominated by the Royals again. The Indians NOT ONLY have built up a rather nice roster, including a RANDOMLY AMAZING OUTFIELD featuring Tyler Naquin and Rajai Davis (and...probably Marlon Byrd when he gets back from the suspension), but they have the strongest pitching rotation in the AL, hands down.

Danny Salazar, Corey Kluber and Carlos Carrasco I've already spoken about, I think, this season- all three are known strikeout artists, and they're all on this season, even if it doesn't show it, as usual, in the wins column for Kluber. Trevor Bauer, however...I've skirted along in the past, but now I get to talk about him- this is one of those guys I've been rooting for ever since his debut in Arizona.

It's weird- when he got traded to the Indians initially there were thoughts of 'oh, this guy's gonna be their ace', and 'oh, he'll mop the floor with midwest batting'. But...for a while he was just an okay, strikeout-heavy pitcher in an okay rotation. The Tribe could not rely on Bauer for his stuff until they had a good enough rotation to base him around...and now they do, and now Trevor Bauer's throwing absolute fire.

The Salazar-Carrasco-Kluber-Bauer-Tomlin combination was one that was cooking for a little while, and throwing names like Cody Anderson and Zach McAllister didn't do too much other than establish the dominance of those prime five- Tomlin, while definitely bringing up the rear, has a killer win-loss ratio and is still a fantastic big-game pitcher, so it doesn't worry me.


What worries me however is my fear of the Indians peaking in August. They're amazing now, and they're killing everyone now...but I'm worried that their huge lead's gonna catch up to them, and somebody like Detroit is gonna catch up. What they NEED to do is secure a trade deadline deal, like Jonathan Lucroy or somebody, that can bolster the roster while also keeping the momentum going. Heck, they could trade for Chris Sale or Julio Teheran if they wanted to, and push Tomlin to the 'pen- that'd just piss off the league and rid them of prospects, but if they wanna win NOW...that's the way to do it.

The 2016 Indians are a wonderful baseball story...and I'd rather die than see it burn out this early.

Coming Tonight- Well...I'll be at a baseball game tonight...so, odds are, a recap of that. Until then, Go Bucs!
Posted by Jordan at 8:52 AM