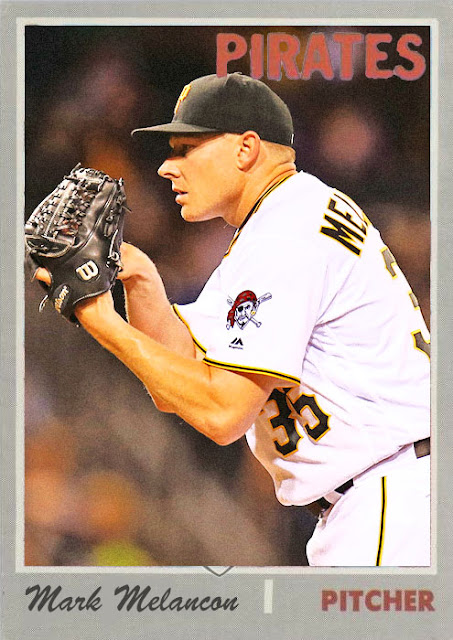 I've been in Pittsburgh for the last few days, as I've been working with a traveling film camp around the East Coast. It's a really cool job, and I love it, but it brought me to Pittsburgh this week, and I figured, as I'm in town, I might as well pay a visit to one of my favorite places to watch a ballgame, PNC Park.

So...I did...and I was not disappointed.

First of all, one of the reasons why I love the park is the city is right in view, and the bridges and walk around the stadium is so fun. Plus, the fans are all into it, and tonight the entire place was packed- this was a complete 360 to how it was 5 years ago, when I sat behind home plate for a very cheap amount of money, mainly because it was still a foreseeable option.

Tonight...we sat along the third base line in some pretty nice seats, and got to see the Pirates take on the Seattle Mariners, featuring James Paxton on the mound.

Luckily...the Pirates pitched Gerrit Cole tonight, and the man was on the entire night. He pitched nine solid innings, only allowing four hits and one run, and completely shutting down an offense that can be deadly if underestimated. Cole is already an outstanding pitcher, but the fact that he could notch a CGV like that is pretty extraordinary, especially seeing as the Pirates aren't a perfect team all around.

Although...it's not like Cole did this alone. The entire lineup took great pleasure in bashing the ever-loving shit out of the Mariners pitching...especially James Paxton. All it took was some RBI stuff from Josh Harrison, Starling Marte, David Freese and Jung-Ho Kang to power the 3-run 3rd inning...and for a while, it looked like that would be all. But the seventh inning was even more explosive, and the hits kept coming, raining on new Mariner Drew Storen's parade.

The best moment for me was seeing Andrew McCutchen, one of my favorite players, absolutely MURDER a ball thrown by some Mariners reliever, sending it out late in the game, and basically sealing the game's fate. Cutch hasn't been having the greatest season, but he had a pretty impressive night, as if to remind everyone that he is, in fact, still Andrew McCutchen.

The team won 10-1, which is pretty impressive for a team skirting along the fine line of contendership. If they have games like this, when they can play extraordinarily well even WITHOUT John Jaso and Gregory Polanco...then brother, we're in for a hell of a fall.
Posted by Jordan at 11:16 PM