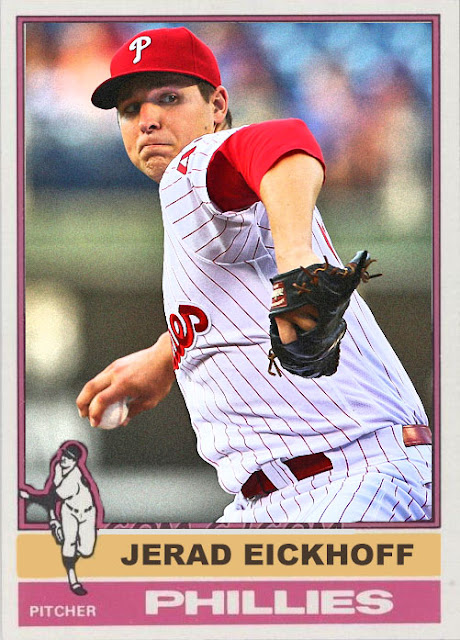 This time last year, Jerad Eickoff was just climbing up the minors in Texas, and waiting for a big break to occur. I mean...it did, but only when he, along with Matt Harrison and a few other prospects, was traded for Cole Hamels and sent to Philadelphia. Luckily for him, though, the Phillies were building their rotation on young arms, and Jerad was just the kind of young arm they needed.

Now, the rotation of Eickhoff, Jeremy Hellickson, Vince Velasquez and Aaron Nola has been...surprisingly potent when it comes to shutting down offenses. I mean, they're not perfect, and it's still the Phillies, but Jerad Eickhoff has become one of the more dominant, impressive starters in the repertoire.

I saw him start earlier this month, and, despite giving up a home run to Erick Aybar in the first inning, he was pretty proficient in striking out the majority of the Braves batters, and letting our Phillies run away with the win. He's definitely got the right kind of stuff, and if Aaron Nola gets his stuff back together, he and Nola could be a stellar 1-2 punch.

The buyers, especially Texas, are farming teams for pitching, and it's likely that someone like Eickhoff or Vince Velasquez could end up getting traded. I hope they hang onto Eickhoff- he's one of the few Philly pitchers who's doing his job correctly this year.

Coming Tonight- Speaking of inexplicable trade targets...the closer for the World Series Champion Royals, everybody!
Posted by Jordan at 2:36 PM