A Semi-Nostalgic Look at 2014 Stadium Club 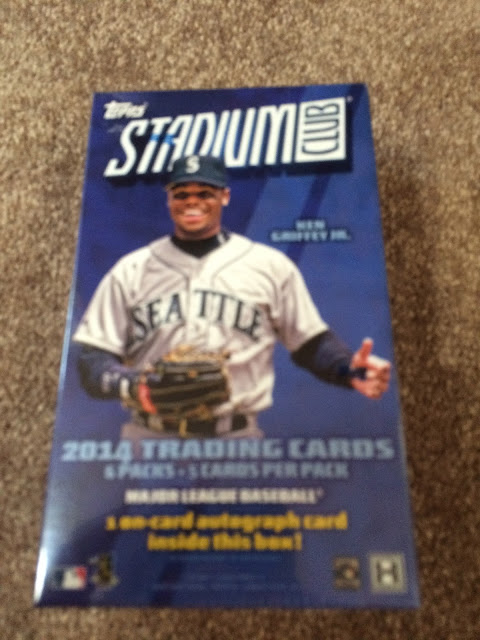 I know we're all in 2016-SC-Mania (and yes, in the next week or so I will be partaking in some more), but while we're all talking about how amazing that set is, I want to look back at the 2014 set, the inaugural release of the new relaunch.

I remember when the '14 issue was announce, midway through 2014 without any prompting, I was shocked and not exactly sure what to think. Sure, the Bryce Harper card they showed us was impressive, but this was post-independence Topps. They had already screwed up the 2008 incarnation of the set by turning it into a hit-friendly premium-esque set, and taking the emphasis away from what had always been the strongest part of Stadium Club, the base set.

However, in 2014 Topps gave us a small, hobby-exclusive set that gave much attention and detail to the base set, as well as crafting a definitely memorable box-opening experience.

And then, over the next few years, Topps refined the Stadium Club brand into a well-oiled machine that gives the most impressive photography any baseball cards have had in YEARS. Yes, the 2016 and 2015 sets are MILES ahead of where the 2014 set was, but we gave it a ton of praise because we hadn't seen anything like it in a while. It was refreshing- overpriced and a bit understaffed, but still refreshing.

So, even two years later when the standard has been surpassed, I'm gonna look at the 2014 set from this distance, and judge it on what it's ended up as. 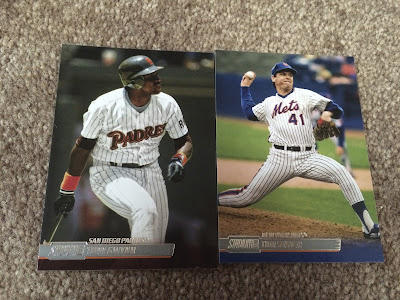 Pack 1- Again, two Hall of Famers, but two really nice photos of them that you don't see everyday, and with the right amount of filtering, color and detail. Of the three current sets, I think this has the most bland design, and also the most un-Stadium-Club-like, as with the colored bottom border, the cards are technically not full-bleed. It's not a bad design, it's just minimalistic, and (purposefully) capable of being outdone. 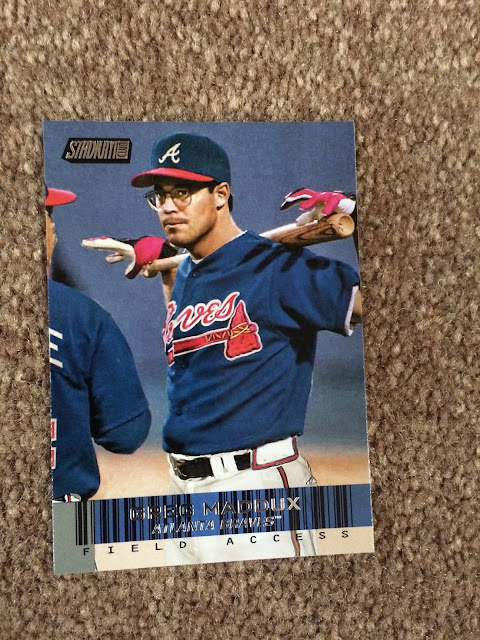 I think it was a bit overambitious of Topps to release the Field Access insert set as a large-checklisted insert set, and give small enough insertion ratios that the odds of completing the set are pretty slim, but I'll give them credit- a photo like this one of Greg Maddux would be right at home in the 2016 Set, especially with the graininess and emphasis on color. 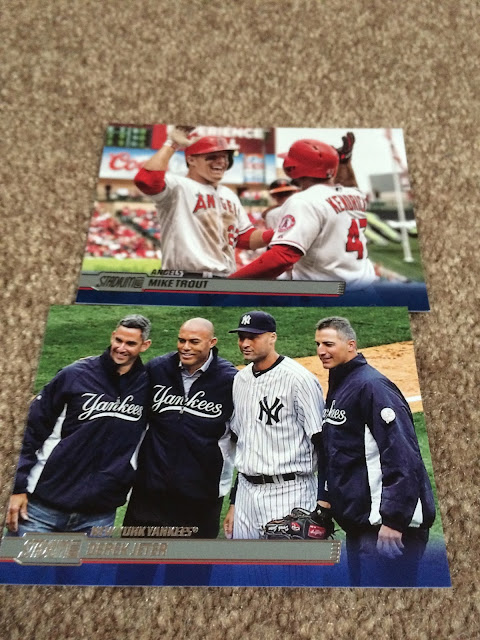 As someone who's eventually planning on completing the set (want list might go up eventually), FINALLY nabbing these two star cards, of Mike Trout and Derek Jeter, was pretty relieving. Trout's is a nice, if semi-standard, celebration card. Jeter's is something special- all four of the Bronx Fab Four, together in one triumphant shot. I'm glad i finally have my hands on it. 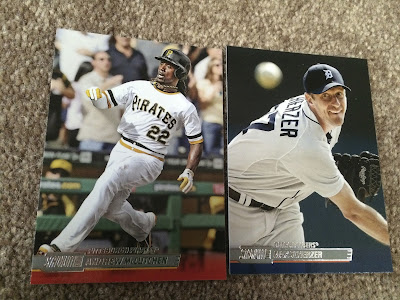 Pack Two- I already had both of these, but they're still pretty nice- Cutch's throwback AND Scherzer's well-zoomed fastball. I'm a bit discouraged that neither will be on the All Star team this year, but still. 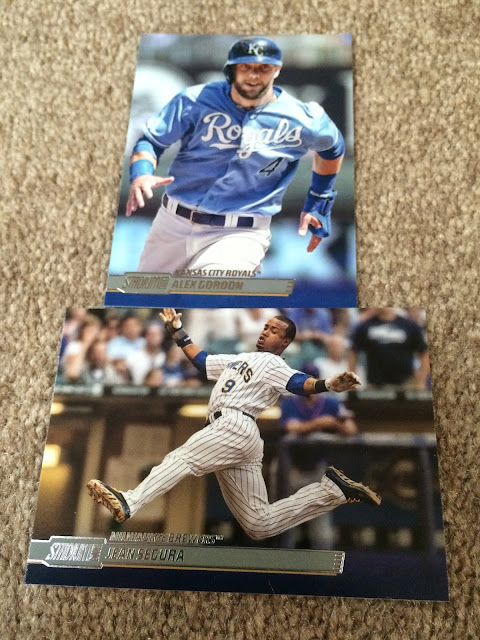 The Gordon was new to me, I believe. The Segura's great because you get the click of the photo at the exact right time- the look on his face is pretty excellent.
I'm noticing that the '14 set has a lot less filtering and fading, in comparison to the later two. There's a lot more shadow, a lot more darkening, and a lot less grain. Just an observation. 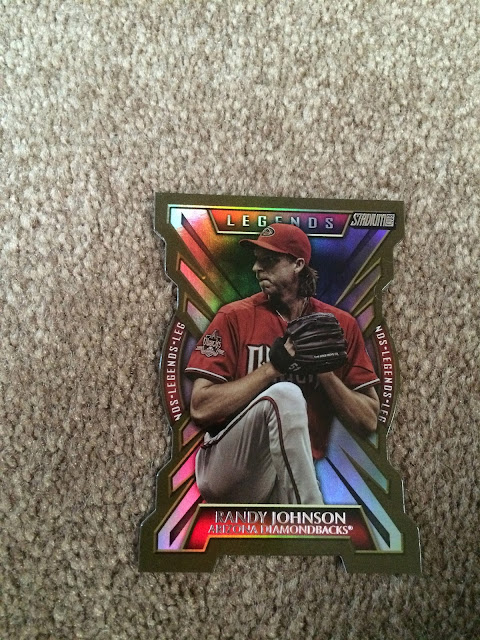 I think it's very odd to see someone in an Arizona Diamondbacks uniform, especially a 2007 Arizona Diamondbacks uniform, on an insert set entitled 'Legends', but if anyone deserves the moniker of legend, it's Randy Johnson.
I'll say that Legends is still the weakest of the Stadium Club inserts, die-cut aside, but even then it's still a pretty cool one. 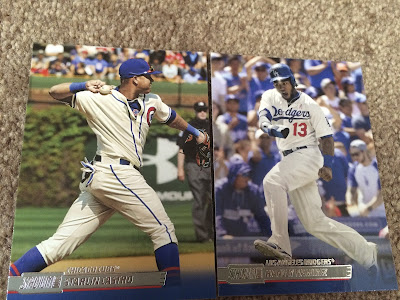 Pack 3- Had both of these. Love Castro's throwback. 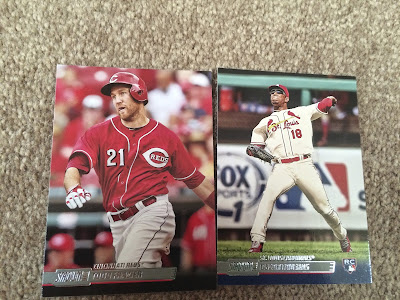 Both of these ones I did need. Frazier's is actually kind of plain for SC, but I do enjoy Taveras', especially the background detail. A shame his career was cut so short, but it's still a great issue to go out on. 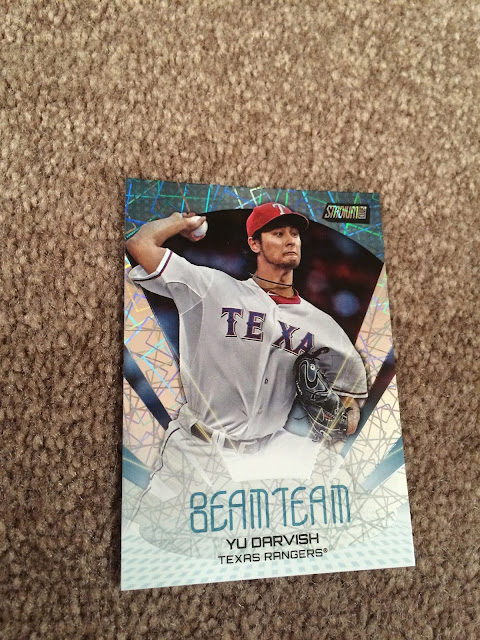 Of course, the Beam Team inserts are a staple of Stadium Club, and I'm glad they still look good. Darvish is a pretty nice choice, too, even if he's been injured a lot lately. 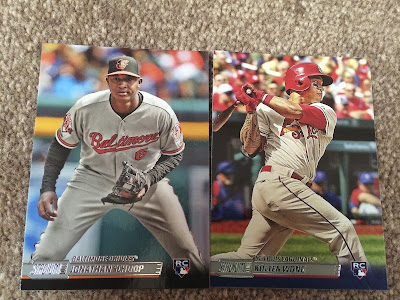 Pack 4- Two rookies I already have. Both actually have held up. 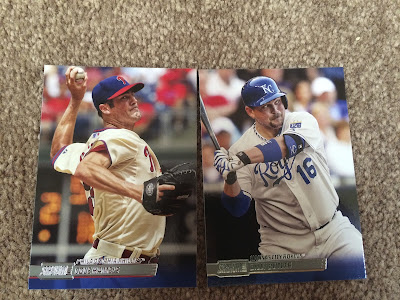 Hamels' was one I needed, I believe. Butler's I already have. I'm pretty glad that SC would move on from zoomed-in standard shots like this one. 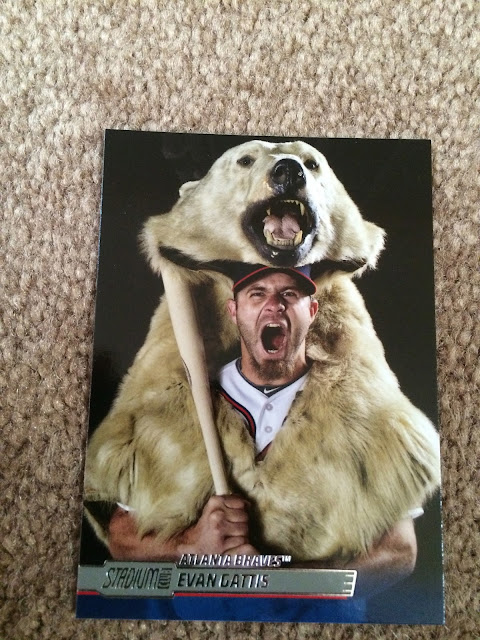 Well, when this set was released, I kept hearing that this specific card was one of the best base cards in the set...and I'm very tempted to agree with them, now that I finally have it. So much energy and emotion in that card, even from the bearskin. I'm glad Topps would explore more amazingly insane shots like this one in the future (like the Robin Yount in '16's set.) 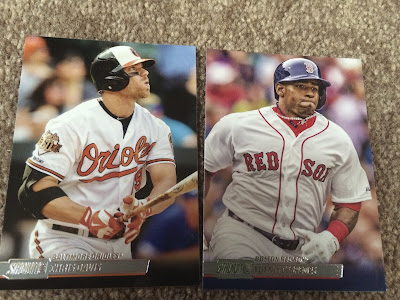 Pack 5- I already had these. Wow, remember when Yoenis Cespedes was a Red Sock? And remember how Stadium Club was released late enough to get a shot of him there? 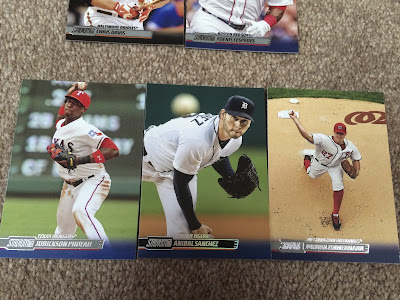 Three more base cards I believe I own. The Sanchez is a rainbow parallel, for what it's worth. 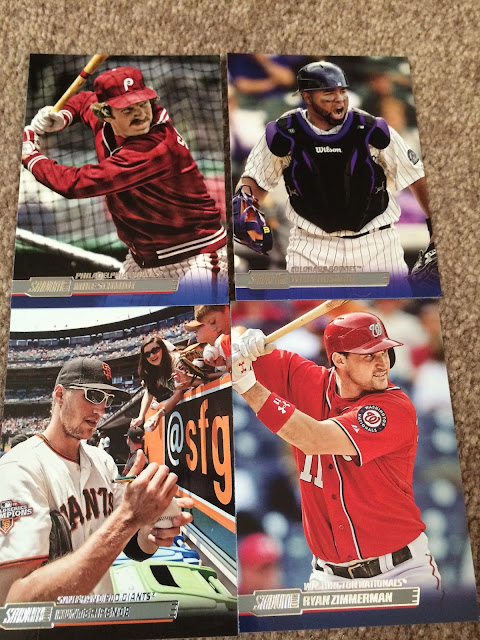 Pack 6- Some really nice base cards, with an emphasis on the Pence and the Schmidt. I had all of these, though.

Each mini box comes with an autograph. I've pulled Julio Teheran, Matt Adams, Chase Anderson and Junior Lake out of these boxes. This one.... 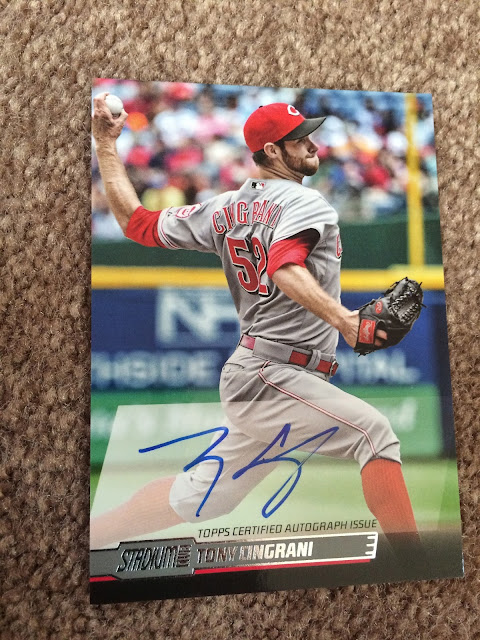 ...was NOT one of my better pulls. Cingrani's been pitching out of the 'pen this year, which is kind of shocking because the Reds are kind of short on starters, I think. Still, I could have done way better here, but at least it's someone I've heard of.

That was 2014 Stadium Club, folks. It was good, but it's been outdone by Topps' subsequent offerings. One of which I'll be taking a more in-depth look at...later this week.
Posted by Jordan at 2:37 PM
Labels: 2014, box break, Product Review, Stadium Club, Topps