In Cespedes They Trust 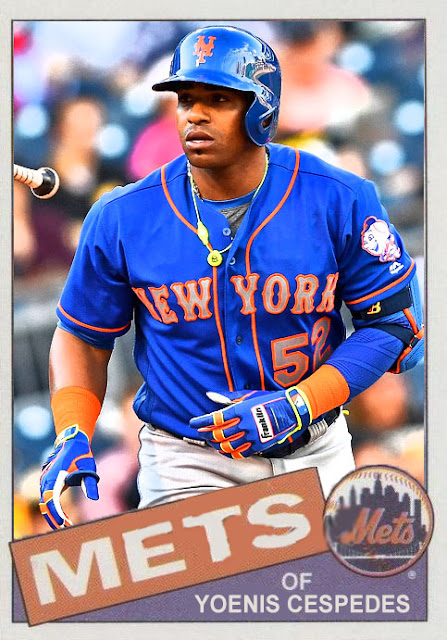 This isn't necessarily my '4th of July' post (I'm going to a Phillies game later, so that should take care of any patriotic goings on on the blog), but I wanna talk about a guy I was worried about for a while back there, who's suddenly doing pretty well for himself. I wanna talk about Yoenis Cespedes.

For a while, he was...good enough, as a member of the A's. His team won divisions, he hit home runs, but it was never really enough. He was never the strongest member of that team- I think the only time he truly excelled was in the Home Run Derby those years, just going up there and flat out dominating every year- that took some serious skill in itself, and he owned those moments.

For a while he bopped around between a series of teams that didn't really need him, like the 2014 Red Sox or the 2015 Tigers, until he landed in Flushing Meadows...and very quickly became the absolute best hitter on that team.

The speed at which he hit his home runs last year was phenomenal to watch- it's like he was made for CitiField, it's like the home runs came so much easier to him there, rather than in Oakland or Fenway or whatever. And then, he began to fit into the fan dynamic as well- the yellow armband that he wore so well became a fan giveaway- the other day I saw Travis D'Arnaud wearing one, and some of the other players sporting them.

The whole city has rallied around Yoenis, to an extent unrivaled by his whole career. He's been in the league five seasons now, and he's FINALLY get around to the appreciation and numbers he's been waiting for since he came into the bigs. He's hitting home runs, the fans love him, and barring catastrophe he'll be starting an All Star Game for the first time next week, for the NL. I'm not sure if he'll play in his THIRD Home Run Derby, but it'd be nice.

I'm just glad that he's finally where he belongs, and I hope the good luck keeps going for him.

Coming Tonight- Probably either a recap of the Phillies game or a custom of the sole ticket-seller left in Minneapolis.
Posted by Jordan at 1:42 PM