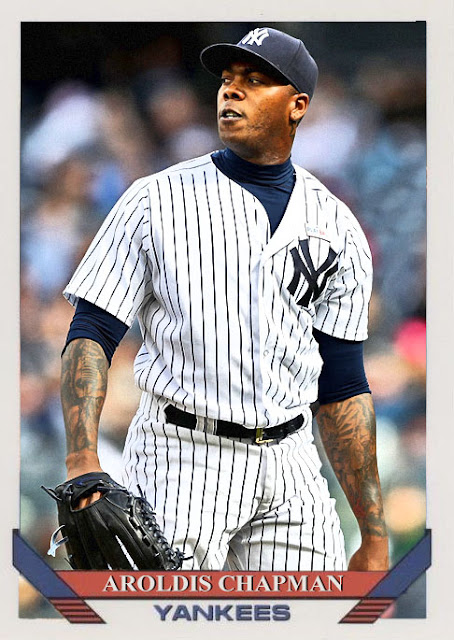 You're asking my opinion on Aroldis Chapman landing on the Cubs?

Look...I made peace with the fact that Aroldis Chapman wouldn't be playing for my team for too long...some time ago. I'm not exactly...distraught. Am I sad? Yes, of course I'm sad- if I ran the world Aroldis Chapman would be a Yankee for eternity and there'd be tons of cards of him as a Yankee. But, this is the 2016 season, and the Cubs need a closer than isn't Hector Rondon.

And the Yankees just took Chapman as a means of stopping everyone else from getting him anyone- Cashman saw the discount, took it and ran. He already had a perfectly good closer in Andrew Miller, who..will be closing a few more games now that Chapman's gone. But the Three-Headed Monster idea was the best lemons-to-lemonade scenario they could have dreamed of.

Once Hector Rondon began the season by blowing saves, I kinda knew Chapman would end up closing for Chicago eventually. The writing was on the wall. So I'm not too broken up about it. If anything, Chapman to the Cubs is a bit obvious. I would have loved to see a rogue team jump in and snatch him.

So yeah...Aroldis Chapman's not a Yankee anymore. Boo hoo. But at least now he might be closer to a World Series.
Posted by Jordan at 4:03 PM
Labels: Aroldis Chapman, Cubs, That wasn't as bad as I thought, Yankees