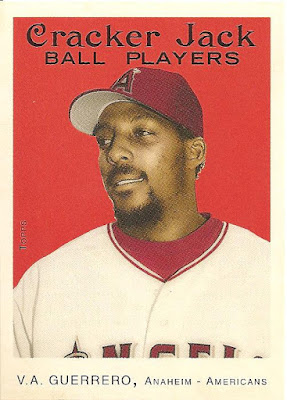 I hadn't been to this card show in a while, and, unbeknownst to me, it had fallen on some hard times. There were only three tables at this show, and only one of them sold, like, reasonably priced singles. Thankfully said singles were dime boxed, so I got to pick a bunch of them for a while. 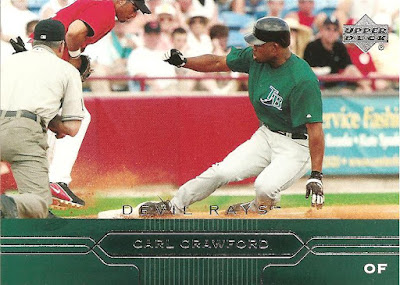 The way these dime boxes were laid out were pretty nice. He had them organized by set name, then by year, then by offshoot. All the Bowman sets were together, all the Donruss', and so on. He must have broken a ton of old hobby boxes of these products recently, just to lay out the commons. So, he had a lot of 2000's era Upper Deck, Fleer, Donruss, etc. 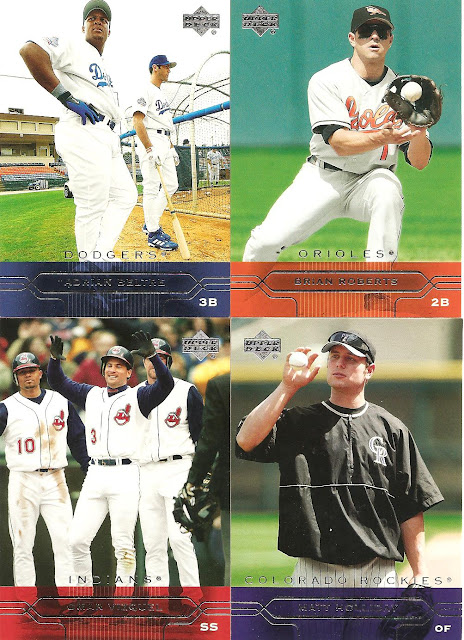 I didn't have a ton of 2005 Upper Deck in my collection, as it was a few years before I started collecting, but there were some in there. It seems very...off, in terms of other UD sets. Compared to '06 UD, it's very different. 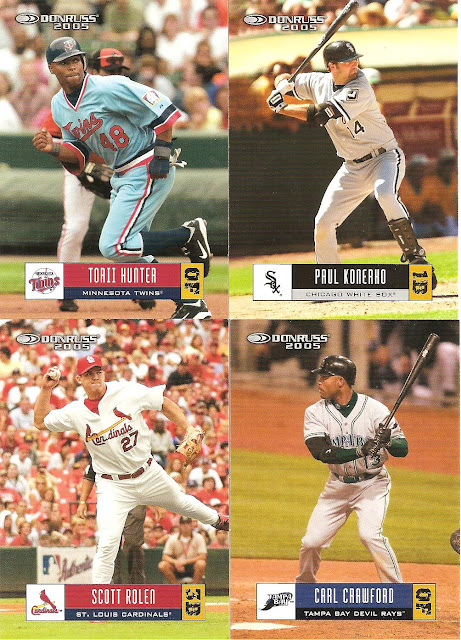 A few from the last ever licensed Donruss set. Very bland design, but still full bleed. Reminds me faintly of some of the early Panini Football designs. Also, that throwback on Torii is pretty nice. 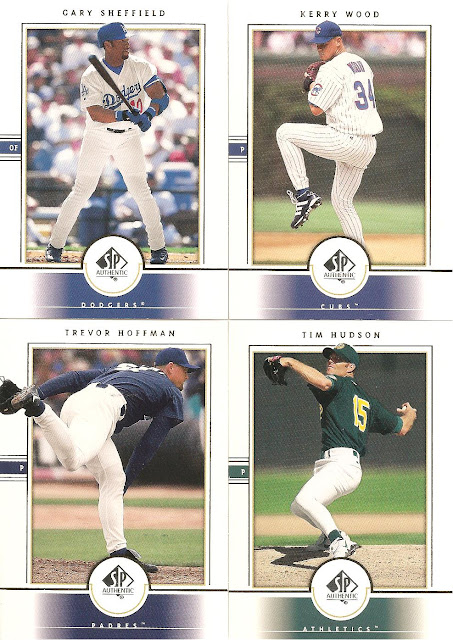 He had a bunch of SP Authentic, too. I feel like a lot of those early sets chose a lot of boring photos. 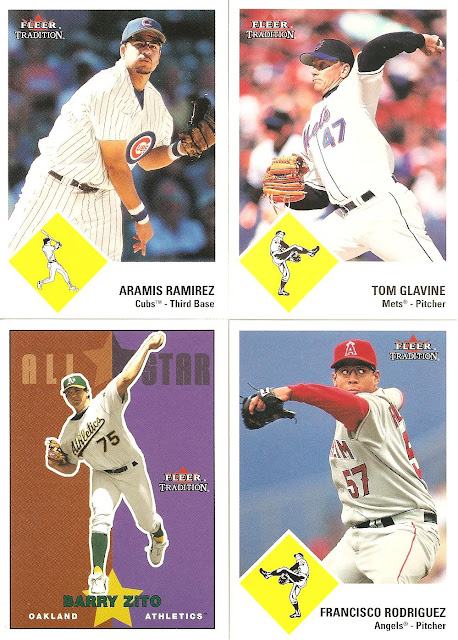 '03 Fleer Tradition (Update). I love the design of the All Star cards. Really colorful. Also, these count as the first cards of Aramis Ramirez as a Cub, and Tom Glavine as a Met, for Fleer. 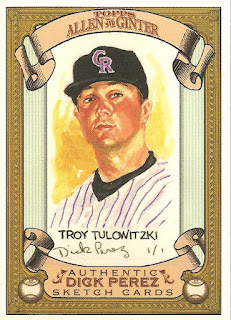 In addition to just spit-balling for players in a number of those sets, the guy had a lot of sets I actually like, like the old '07 A&G Dick Perez Sketch Cards. In addition to this card of recently-traded Tulo... 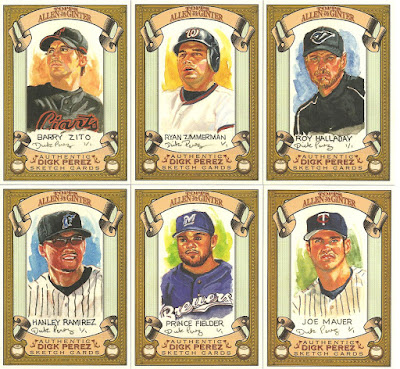 I also got 6 more I needed. Very nicely done, too. 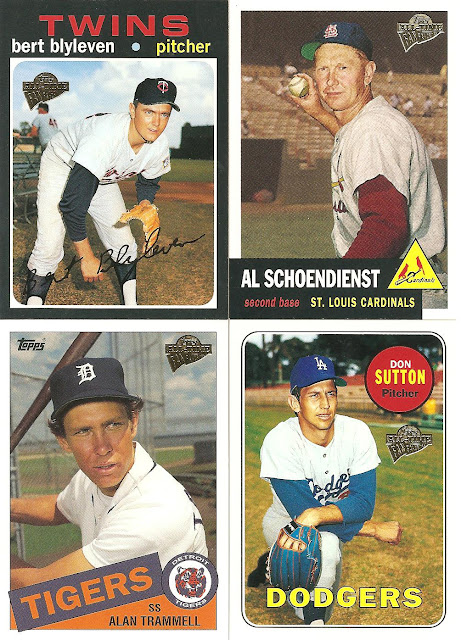 Yes, he even had some All-Time Fan Favorites, which I still enjoy. I didn't think I'd be picking up a Red Schoendienst card today. 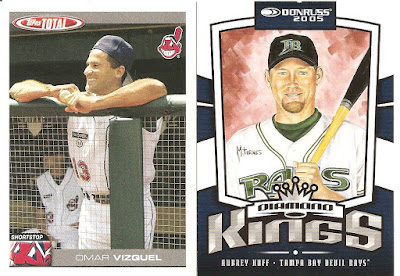 Topps Total I've been getting a lot more of lately, just to get guys from before they were on ML rosters. But that Vizquel is a pretty nice one. Also, the Huff is an in-set Diamond King, rather than a Diamond King from 2005 Diamond Kings.

Lastly, as it's a guilty pleasure, I got a few singles from 2011 Topps Lineage. Top to bottom- retired power hitters, current catchers, and two guys on their last legs. I do love the Vladdie, though. 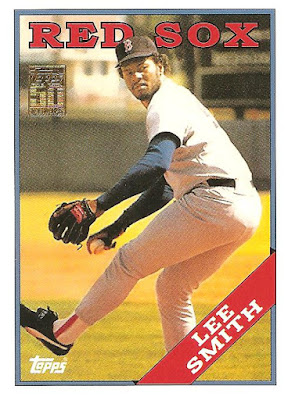 The one upside of all of these busted hobby boxes is this guy happened to bust a ton of 00's Topps Traded, especially the ones before I started collecting. This helps matters especially, as I needed a lot of these for sentimental value. This Lee Smith is from 2001 Topps' 50 Years Reprints, especially the ones they did for the traded set. 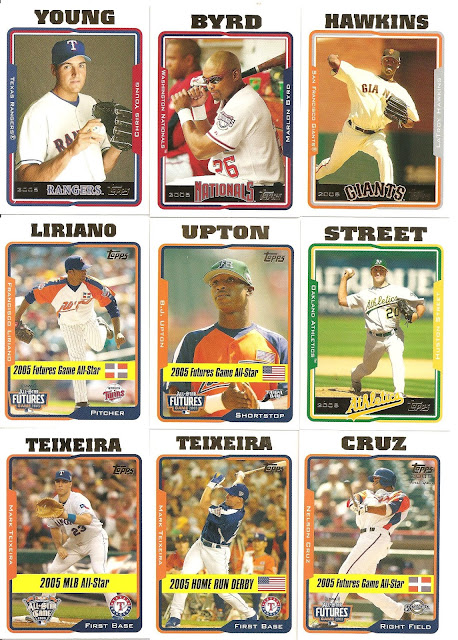 All 2005 Traded. That Huston Street one is technically his rookie card. Also, the Nelson Cruz technically counts as a card of him on the Brewers, before he was traded to the Rangers for Carlos Lee. 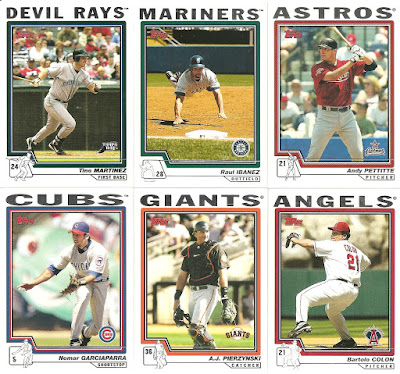 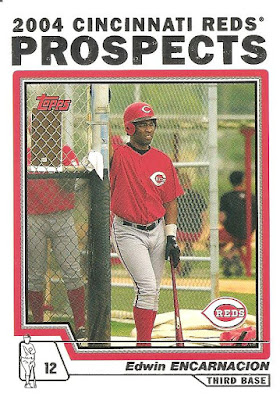 I believe this counts as an Edwin Encarnacion rookie, unless he popped up in a previous Topps update set I don't know about. 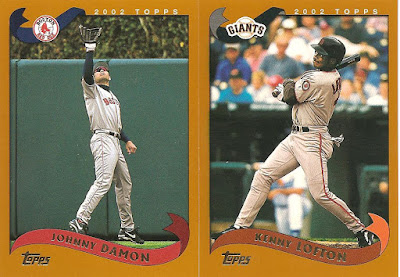 '02 Topps Update. Both would be on the Yankees in a matter of years. Thankfully Damon would stay longer than Kenny. 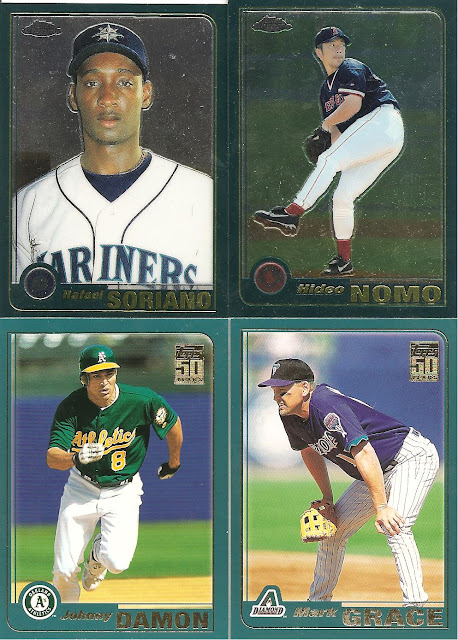 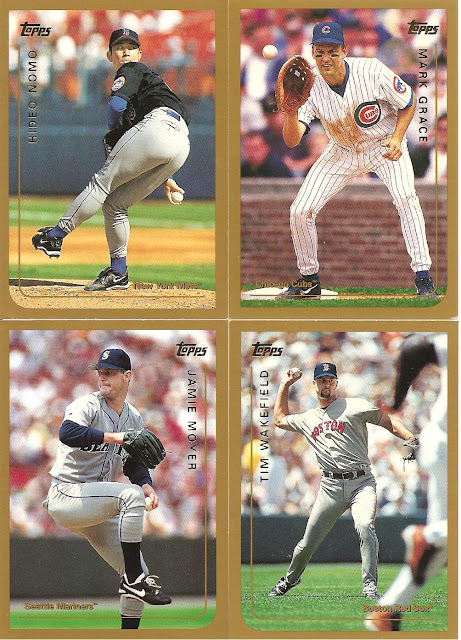 These aren't from Update. These are just from 1999 Topps, because he had a bunch of those. Another odd uniform from Hideo Nomo. 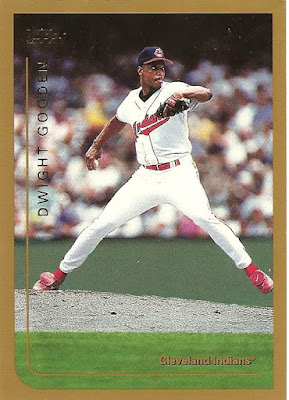 Speaking of odd uniforms on players, this is a card of Dwight Gooden as a Cleveland Indian. Don't see that everyday. 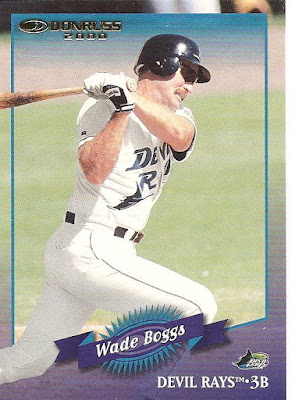 To finish up this post, the guy did have a lot of cards of people I collect from that era of '00-05. So, I scooped up a bunch of those cards. This card of Wade Boggs is from the 2000 Donruss subset of 2001 Donruss. Which...is pretty stupid. 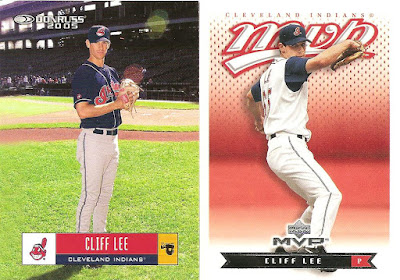 Two early-career cards of Cliff Lee. I really wish he comes back to pitch for the Phils next year. We need him. 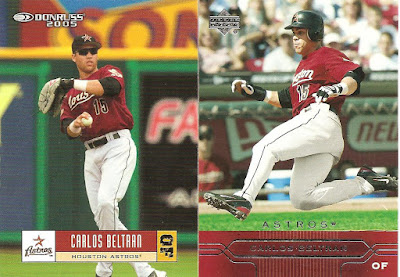 Two cards of Carlos Beltran on the Astros, a mid-career stop that not a lot of people remember. I wish there were more cards of him on the Giants, too, but I'll settle for all these Beltran-as-an-Astro issues. 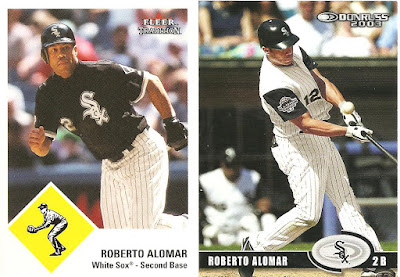 Two cards of Roberto Alomar on the White Sox, a stop that basically nobody remembers, even if he just ended up going back the next season. 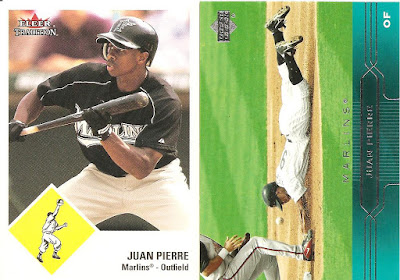 Two Marlins cards of Juan Pierre. Even if he was only there for a few seasons, most people say Pierre's Marlins years count as the peak of his career. 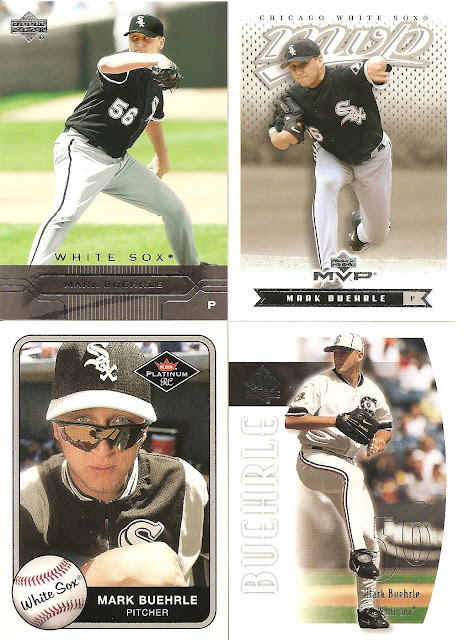 Four very-early career cards of Mark Buehrle. The ones on the bottom are my favorites. I love the sly little sunglasses look Buehrle has, and I also love the throwback. 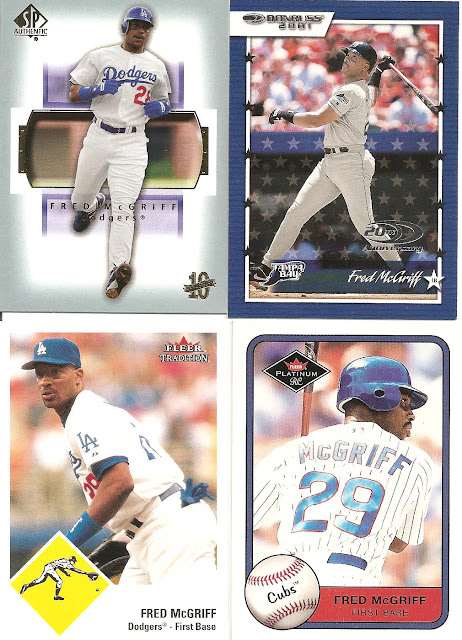 Because I'm me, four cards of Fred McGriff, on a bunch of different teams, but mostly the Dodgers. I still think he should at least be considered for the Hall of Fame. 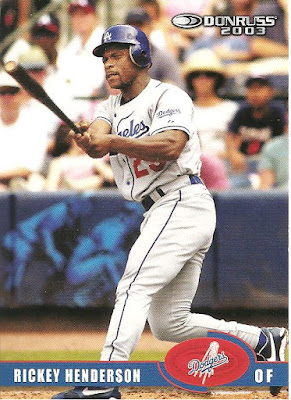 A final salute by Donruss to Rickey Henderson, showing him in a Dodgers uniform. 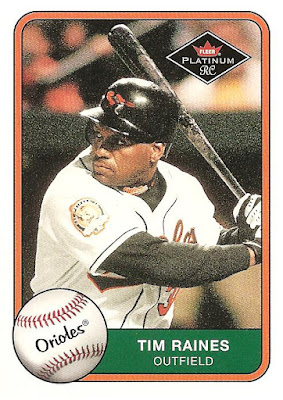 And finally, a card of Tim Raines on the Orioles, one of his last cards in one of his final seasons, which is pretty sentimental.

I'm glad I at least found this dime box guy, even if he was the only real guy at the card show that had good, cheap stuff. Still, at least they had something good.
Posted by Jordan at 1:00 AM
Labels: Card Show, Vladimir Guerrero