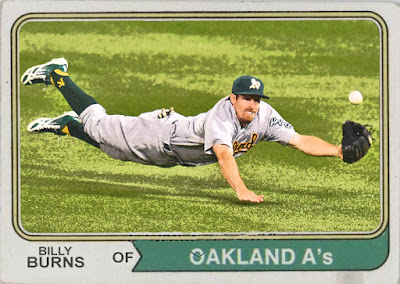 I feel bad for the Athletics. Every once and a while, like in 2012 or 2013, the Moneyball strategy works, but when it doesn't, they purge big time and wind up starting from anew. They've had so many purges that it's become almost routine.

This season we've seen people like Stephen Vogt, Marcus Semien, Mark Canha and Max Muncy. Other than Semien, who was starting in Chicago last year, you haven't really heard of these guys before. They're brand new, young, spiffy, and Billy Beane is intent on bridging the team around them so that if this fails again, he can just throw new ones in there.

Billy Burns is the one guy, other than Vogt, who's been making second-half progress, making some definite strides in some unlikely categories, like defense, stolen bases, and triples. This is the kind of fringe player that Oakland needs. Billy Burns isn't gonna set the American League afire with his home run ability. He's gonna be a fun little hits guy. Unfortunately, fun little hits guys aren't really going to get the A's anywhere. And the guys they're paying to hit...aren't hitting.

Hopefully Billy Burns will eventually become a bright spot in this lineup, because there are too many things wrong with it right now.

(EXTRA- WOULD YOU LIKE TO SEE FOOTBALL CUSTOMS ON THIS BLOG THIS SEASON? There is a poll on the sidebar that will decide the fate of football customs. Vote now and you'll make a decision for me. How fun!)

Coming Tomorrow- A strong, tatted pitcher for a strong-looking NL East team.
Posted by Jordan at 9:31 PM
Labels: A's, Billy Burns, But can he get on base?, Custom Cards