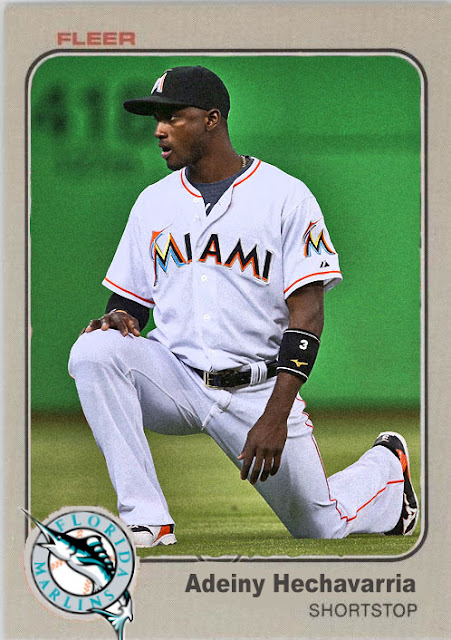 You have no idea how much practice it took for me to spell this guy's name without looking.

I mean, even if the Marlins aren't doing great, like this season, I still need to memorize player names and spelling just in case they get good enough for a custom. Hechavarria had some nice games, and is leading his team in a bunch of categories, plus he hasn't had one yet, so I figured I'd crank one out, even if it's from a team that isn't especially relevant right now.

And yes, the Marlins do have a lot of good pieces, but those pieces have to be A.) Hitting well and B.) Not injured for this team to work. Marcell Ozuna was not hitting well. Henderson Alvarez and Giancarlo Stanton are injured. Hence, the team is not doing very well. Matter of fact, it it weren't for the Phillies being...the Phillies, they'd be back in last.

The team does have some promise, but requires a lot more effort than they're currently giving. If Stanton can stay healthy, and if they bring up more young players who can stay consistent, they could have a decent enough team, but the division is still pretty tough. The Nats and Mets are hot, and the Braves may be a few years away from relevance.

So, Hechavarria is a good piece, but he can't help his team alone. Which is a little sad.

Coming Tomorrow- A pitcher for Cleveland who's been flat out dominating this season.
Posted by Jordan at 10:39 PM